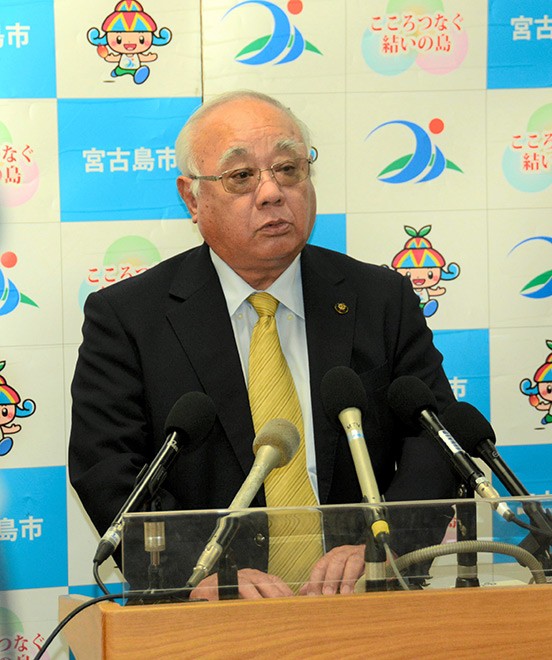 Toshihiko Shimoji when he was mayor of Miyako, Okinawa Prefecture, in 2019 (Asahi Shimbun file photo)

NAHA--A former mayor of Miyako city on Miyakojima island has been arrested on suspicion of taking bribes in connection with a Ground Self-Defense Force camp built on the isle, Okinawa prefectural police said May 12.

Toshihiko Shimoji, 75, is accused of receiving about 6.5 million yen ($59,900) in cash in 2018 in return for pushing a local golf course as the prospective site for the GSDF camp.

The Chiyoda Country Club golf course ended up selling its land to the central government for the camp.

Sources within the Defense Ministry said the 22-hectare plot of land was sold for about 800 million yen.

Police said they also arrested Fujiyasu Shimoji, a 64-year-old director of the Chiyoda Country Club, on allegations of giving bribes to the former mayor.

Police did not say whether the two suspects, who are not related, have admitted to or denied the allegations.

Toshihiko is an influential figure among conservatives in Japan’s southernmost prefecture, boasting of strong ties with Prime Minister Yoshihide Suga and other heavyweights of the Liberal Democratic Party-led administration.

He served three terms as Miyako mayor from 2009 to 2021. In the election in January, he received support from the Suga administration but lost to a candidate backed by supporters of Okinawa Governor Denny Tamaki.

The central government in 2011 announced a policy of deploying GSDF troops to Miyakojima in response to China’s growing assertiveness in waters in the area.

Japan said defense of Miyakojima and other islands between the main island of Kyushu and Taiwan must be bolstered, calling the region a “power vacuum.”

Miyakojima is near the Senkaku Islands, a group of uninhabited isles that are administered by Japan as part of Okinawa Prefecture but claimed by China.

Toshihiko announced the city’s decision to approve the planned GSDF camp in 2016 and won re-election in 2017, when the camp issue was at the center of the campaign.

The Defense Ministry initially presented two prospective sites for the camp. But Toshihiko ruled out one site, citing concerns about potential water pollution. That left only the golf course in contention.

Police said that by announcing the city’s position, Toshihiko made things easier for the Chiyoda Country Club to sell its land to the central government for construction of the camp.

Toshihiko is believed to have received the 6.5 million yen in Tokyo around May 24, 2018, police said.

At a news conference on May 13, Chief Cabinet Secretary Katsunobu Kato said he is not aware of any flaws in the selection process for the camp site.

“Heeding the mayor’s decision, the Defense Ministry proceeded with the selection,” he said.

The chief government spokesman declined to comment on the former mayor’s arrest, saying police were still investigating the case.

The ministry began building the GSDF camp on Miyakojima in 2017 despite opposition from islanders.

The newly built camp opened in 2019 with 380 or so members whose main responsibility is patrolling Miyakojima. An additional 320 GSDF members were dispatched to the camp to handle surface-to-sea and surface-to-air missiles in 2020.