Ad with bamboo spears, virus was message ‘not to repeat mistakes’ 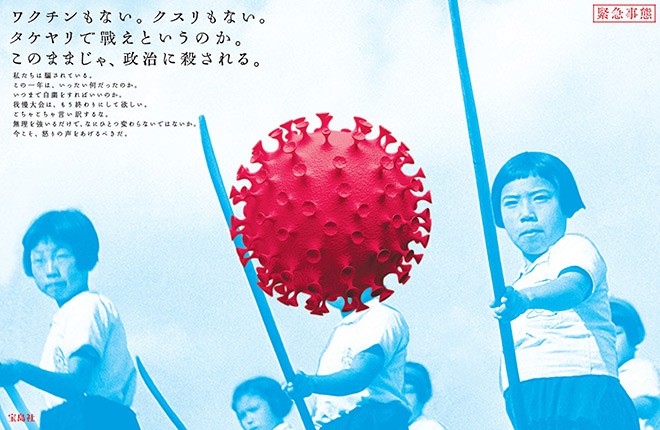 A Tokyo-based publishing company defended its two-page newspaper advertisement that used World War II imagery to send a blunt message to the government about its handling of the COVID-19 pandemic.

The ad by Takarajimasha Inc. read: “No vaccines. No medications. Are we supposed to fight with bamboo spears? If this goes on, we will be killed by politics.”

It carried a picture reminiscent of wartime military drills for school children to learn to fight against the enemy with bamboo spears.

In a prepared statement, a representative of the company said the ad was intended to send the government “a strong message that we should not repeat the same mistakes.”

“People’s frustration with the central government, which has kept forcing people to show self-restraint, has reached a peak while the development, securing and administering of a vaccine has been delayed,” the representative said.

The advertisement, which appeared in the morning print editions of three national newspapers—Asahi, Yomiuri and Nikkei—on May 11, generated a buzz on social media.

Much of the reaction was positive, with some posters saying, “It’s dead-on” or “Thank you for saying that.”

But others criticized the ad for likening anti-virus measures to unscientific bamboo-spear training.

The representative explained: “The current circumstances in which only citizens are forced to bear the burden by wearing masks, washing hands, avoiding crowded places and showing self-restraint overlap with the unscientific war strategy during World War II that forced even little girls to do bamboo-spear training.”

A large red spherical object resembling the novel coronavirus appeared in the center of the advertisement.

In a smaller font, the ad read: “We are tricked. What was the last year after all? How long do we need to show self-restraint? We don’t want this game of patience anymore.”

It continued: “Don’t make excuses, period. (It) just goes on torturing us, and nothing has changed. It’s high time to voice our anger.”

Some observers said the red virus at the center made the ad look like Hinomaru, Japan’s rising sun flag.

The representative said the advertisement was designed to look like a child was spearing the virus, and that any resemblance to the national flag was unintentional.

The ad never specified the object of the criticism, but it was widely seen as a sharp rebuke of the central government’s response to the novel coronavirus crisis.

The representative confirmed that the ad was intended to relay a message urging the government to learn from its past failures in preparing for or taking effective action against the virus, and to make the maximum effort and offer thorough explanations from now.

Since 1998, Takarajimasha has occasionally placed advertisements that included social messages.

In January this year, the company created an ad that featured the phrase, “It is said that the spread of infections by close contact with (a patient) is individual responsibility.”

The representative said the company places such advertisements “not as an organ of public opinion or of a publishing firm,” but it rather considers the practice as “a role of a company.”

“It’s the company’s pleasure to use advertisements that make people feel something and give them an opportunity to think about something,” the representative said.