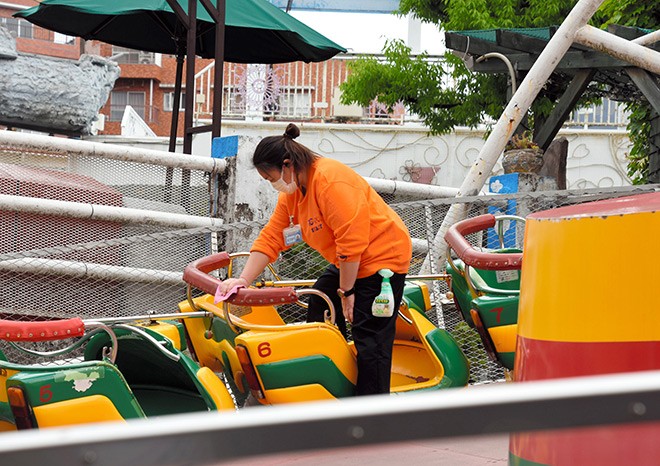 A staff member disinfects a ride at the Asakusa Hanayashiki amusement park in Tokyo’s Taito Ward on May 12. (Takaaki Fujino)

Tokyo confirmed 1,010 new COVID-19 cases on May 13, the first time the daily count topped 1,000 since May 9, according to metropolitan government officials.

Hokkaido logged 712 new COVID-19 cases on the day, breaking record highs for new infections for the second day in a row. The mayor of Sapporo, the capital and largest city on Japan's northernmost main island, said he will request a state of emergency.

Tokyo's latest tally exceeded 900 for the third straight day and brought the daily average for the week in the capital through May 13 to 933.9, or 126.8 percent of the figure for the preceding week.

The number of serious cases in Tokyo requiring ventilators or extracorporeal membrane oxygenation, also known as an ECMO lung bypass machine, fell by two from the previous day to 84, the officials said.

Hokkaido’s latest tally far exceeded its previous high of 529, set on May 12, and topped 400 for the sixth consecutive day. It was also the third time the count surpassed 500, including May 9 and 12.

The Hokkaido government reported six new deaths from the coronavirus, including five confirmed in Sapporo.

The city’s number of new COVID-19 cases per 100,000 people reached 110.1 in the most recent week, more than four times the 25-case benchmark required for issuing a state of emergency.

“Sapporo has the most severe infection situation among the ordinance-designated cities in the country,” Sapporo Mayor Katsuhiro Akimoto said at the city’s task force meeting. “We will ask the central and Hokkaido governments to issue a state of emergency.”