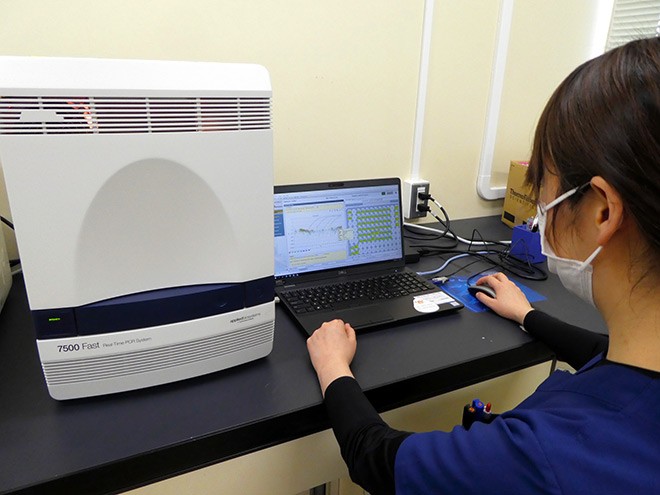 A PCR test shows whether the novel coronavirus sampled is a variant. (Provided by the Ibaraki prefectural institute for health)

About 90 percent of people fully inoculated by the Pfizer-BioNTech vaccine are well protected from variants of the novel coronavirus, having produced antibodies stimulated to better fight them off, Japanese researchers said on May 12.

The vaccine is the only one currently available in Japan.

A team of researchers at Yokohama City University reported the vaccine has a high efficacy against variants after analyzing how it protects against the original form of the virus and seven types of variants, including those believed to be highly contagious and can elude the immune system.

The study includes the variant first detected in Britain, one identified in South Africa, one that has spread throughout Brazil and one raging in India.

“The vaccine will very likely control the variants that have been identified so far,” said Takeharu Yamanaka, a professor of health data science at the university’s medical school.

The same day, the National Institute of Infectious Diseases said the strain that devastated Britain now makes up more than 90 percent of the coronavirus infections discovered across Japan.

Yokohama City University’s study involved 105 health care workers who tested negative for the virus before the study and were fully vaccinated between March and April. Their average age was 42.

Researchers collected their blood samples prior to the first shot, and then again after the first and second shots, to examine whether enough neutralizing antibodies, a subset of immune system fighters, were produced in their blood to help prevent infection.

Through the university’s own technology, researchers used virus-like particles that come with the coronavirus surface proteins, rather than the genuine coronavirus itself.

The study found that after their first jab, 57 percent of the subjects produced enough neutralizing antibodies to protect themselves from the original version of the coronavirus, while that was not the case with variants.

But after the second shot, 94 percent of the subjects were protected against the variant detected in Britain and 97 percent against the type identified in India.

More than 90 percent of the people on average were protected against each of all variants.

Researchers also found that separately from the 105 subjects, six people who already had antibodies to the novel coronavirus had generated enough neutralizing antibodies after receiving the first shot.

To determine whether a sufficient number of neutralizing antibodies were produced, the team used the number required to stave off the original form of the coronavirus.

Yamanaka noted there is a possibility that more neutralizing antibodies may be needed to defend against variants.

Apart from Pfizer, Japan has signed a deal with foreign drug makers Moderna and AstraZeneca over vaccine supplies.

(This article was written by Natsumi Nakai and Kenta Noguchi.)