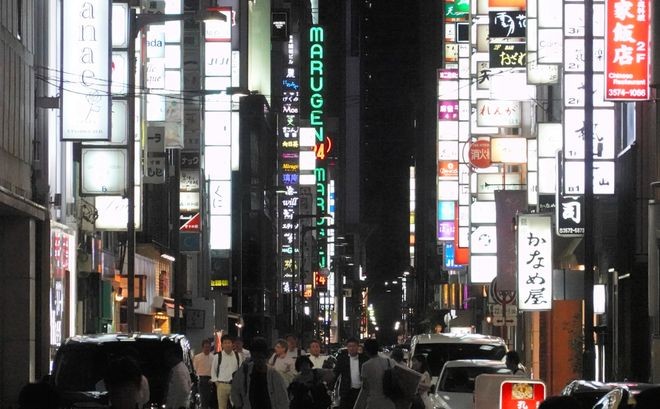 The brightly lit Ginza district in Tokyo is designated as a zone for special measures to eliminate yakuza. (Asahi Shimbun file photo)

A business operator in Tokyo is partly crediting the COVID-19 pandemic for bringing an end to an annoying, years-long practice: paying “protection” money to yakuza gangsters.

“Although the money did not have a significant impact on our financial condition, I felt I should not pay it anymore,” he said. “I am relieved that I could kick the habit.”

Around 100 restaurants and other stores in the capital stopped paying “mikajimeryo” fees to crime syndicates between January and March, according to the Metropolitan Police Department.

About 20 of them reportedly said decreased sales caused by the novel coronavirus pandemic led to their decisions.

“Many shops must be struggling in the coronavirus crisis,” an MPD official said. “Store managers forced to (pay gangsters) should first consult with police.”

Handing over cash is the traditional method of payment for mikajimeryo, but many businesses have also been threatened into buying potable water and potted plants at extortionately expensive prices from yakuza-affiliated companies.

Over the year-end holiday period, businesses are also forced to buy “kumade” good-fortune charms and traditional New Year ornaments featuring zodiac animals for thousands to tens of thousands of yen (dozens to hundreds of dollars).

Police have been strengthening support for those shops, such as patrolling their outlets, so that they can reject gangsters’ demands without fear of reprisals.

According to the MPD, an annual average of 390 to 510 stores in Tokyo stopped paying mikajimeryo over the decade through 2020.

One shop operator had been paying the fees for half a century.

Under the anti-gang law, police have ordered gangsters to stop “shaking down” businesses. In malicious cases, gangsters have been arrested on suspicion of extortion.

Tokyo’s anti-yakuza ordinance prohibits stores in busy commercial areas in designated zones from paying mikajimeryo. The payers face a maximum one-year prison term or a fine of up to 500,000 yen.

But they can gain leniency if they voluntarily report their payments.

“Police will provide assistance and be fully committed to protecting you if we receive consultations,” said a representative of the MPD’s No. 3 department against organized crime. “We would like you to have the courage to contact us so gangs will be eliminated.”

The 57-year-old businessman in Tokyo who kicked the mikajimeryo habit toward the end of last year explained how he ended the unwanted relationship.

In an interview with The Asahi Shimbun in April this year, he said he reached out to the MPD after the business climate deteriorated in the pandemic.

He said he started paying mikajimeryo five years ago, after two large, middle-aged men with “evil” eyes emerged at his shop and told him to buy a “shimekazari” straw festoon for the New Year for 20,000 yen.

Although they did not identify themselves, the businessman said he was convinced that they were yakuza.

When he said he didn’t need the ornament, the gangsters threatened him by saying, “So you don’t care about what will happen here.”

Concerned about his customers and staff members, he handed 10,000 yen to the yakuza members.

The gangsters then appeared with shimekazari toward the end of each year, and the man continued paying 10,000 yen. He didn’t want to contact police by himself, fearing the situation could worsen.

But in December last year, a police official visited his shop, and the man explained his problem. The officer said he “should end the relationship.”

Because his shop kept producing losses in the pandemic, he decided to terminate payment to the gangsters.

Shortly thereafter, when a yakuza showed up, the businessman said he was seeking help from police. The gangster said nothing and left the shop. He has never returned, according to the man.

“It was a good decision to ask police for help,” the businessman said. “Anyone would feel scared when trying to stop payments. Working with other residents in the community to end the relationships will lead to the eradication of mikajimeryo.”

(This article was written by Nobuaki Tanaka and Masayuki Takashima.)