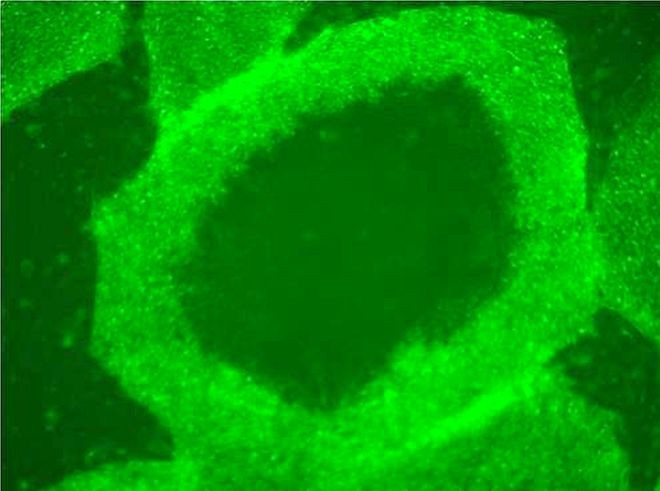 A group of induced pluripotent stem cells emit a pale yellow-green light, but the cells surrounded by iPS cells do not because they have already turned into other cells. (Provided by Kyoto University)

Yamanaka, who was awarded the 2012 Nobel Prize in Physiology or Medicine jointly with Sir John B. Gurdon, called for continuous investments in the research of technologies based on iPS cells, such as one to rejuvenate aged cells.

The director of Kyoto University’s Center for iPS Cell Research and Application (CiRA) made the appeal at a meeting of the science and technology ministry on May 11 to discuss governmental support for projects using iPS cells.

He also noted that research institutes and business operators need to boost their cooperation to realize a seamless flow from basic research through commercialization for the development of regenerative medicines.

“The point is whether we can harness the total strength of Japan,” Yamanaka said.

Yamanaka explained the center's research plans for fiscal 2023 and later, and stressed the essentiality of financial assistance to maintain Japan’s international competitiveness in the fields on which iPS cell researchers are expected to concentrate.

The government is pouring as much as 110 billion yen ($1 billion) over the 10 years from fiscal 2013 through 2022 into regenerative medicines taking advantage of primarily iPS cells.

As the support plan for 2023 or afterward has yet to be determined, the ministry in March started discussions over the issue.

Yamanaka said the technology to create iPS cells will be applied to ascertain the mechanism of how people age, starting from fiscal 2023.

Genes are injected into skin and blood cells to “initialize” them so that iPS cells obtain the ability to turn into other cells again. Improving the method is anticipated to be used to stop cells from aging and rejuvenate tissues.

Yamanaka also expressed his intention to “make treatments using iPS cells common.” Under the plan, the quality, uniformity and costs of iPS cells produced and supplied by the CiRA Foundation will be further improved.