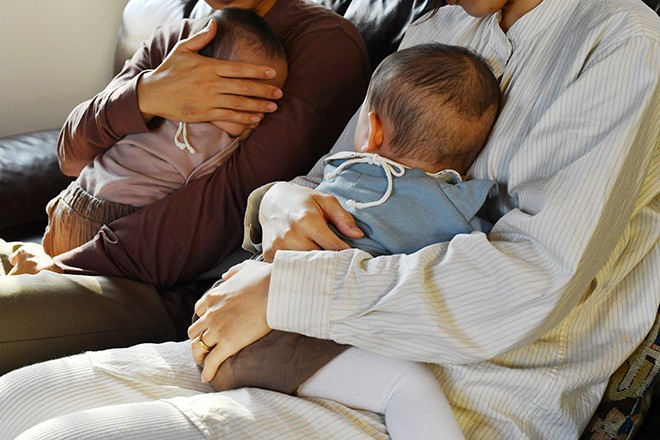 A couple who lives in Osaka Prefecture raises their twins after the mother underwent multifetal pregnancy reduction from the quadruplets she was carrying. (The Asahi Shimbun)

When her pregnancy test kit showed a positive result, a woman in Osaka Prefecture could not hold back tears of joy.

The pregnancy was the woman's reward for undergoing fertility treatments through ovulation-inducing drugs for a year and half.

But the euphoria was short-lived for the woman, a company employee in her 30s.

The pregnancy method resulted in a shocking revelation at a clinic while the happy couple were viewing an ultrasound image.

“You are going to have quadruplets,” the doctor told the woman.

A host of questions instantly erupted in the woman's mind.

The woman was so shocked by the news that she does not remember what she talked about with her husband on their way back home.

A consent form that she signed to use ovulation-inducing drugs at the clinic mentioned the possibility of “a multiple pregnancy,” but gave no further references. The woman simply did not think a multiple pregnancy would ever occur when she gave her approval.

In an online search for more information, she learned about a procedure called multifetal pregnancy reduction.

This procedure would provide her a choice other than two extreme options: either continuing carrying quadruplets or ending the entire pregnancy.

The woman was caught between enormous guilt and anxiety about her own safety if she continued carrying all four fetuses. She experienced many sleepless nights.

One day, on her way home from work, she saw a woman around her age holding a baby at a train station exit. The scene underscored a huge schism between the seemingly happy mother and the reality she was faced with.

The husband noticed that his wife was on the verge of a nervous breakdown.

So he chose his words carefully to recommend the choice he thought best.

“We will reduce our quadruplets to twins, but we will never forget them and live with their memory for the rest of our lives,” he said.

The woman traveled to Nagano Prefecture in October 2019 to undergo the procedure at Suwa Maternity Clinic, one of a handful of facilities in Japan that publicly offers the service.

The following spring, she delivered twin girls at a general hospital in Osaka Prefecture.

The woman said she is happy with her new life with two daughters. But she has never forgotten the two aborted fetuses. She gave each names so that she can talk to them in her thoughts.

“I had thought about my decision to do reductions over and over, wondering if it was the right thing to do, and each time I felt that there was no other choice,” she said.

The woman said she understands that reducing a multifetal pregnancy is a sharply divisive issue. She hopes that rules on reductions are clearly spelled out as a legitimate option for couples seeking to give birth through an assisted pregnancy.

“I would not have felt such a huge distress if there had been an environment where I could have consulted with experts about possible reductions while undergoing fertility treatments,” she said.

PROCEDURE NOT WELL-PUBLICIZED IN JAPAN

Little data is available about multifetal reductions in Japan, such as how many have been performed to date.

At the Suwa Maternity Clinic, a stream of women with multiple pregnancies visit to inquire about the procedure. In 1986, the clinic became the nation’s first facility to announce that it offers the multifetal reduction procedure.

Yahiro Netsu, head of the clinic, said he performs the procedure about 50 to 60 times a year. Citing personal accounts offered by his patients, he assumed that many facilities, in fact, offer the service across the nation.

But few would publicly acknowledge the service because multifetal reduction has been treated like an “illegitimate procedure,” he said.

Under the Maternal Protection Law, which defines what constitutes an abortion, an aborted fetus is required to be removed from the mother’s body.

In a pregnancy reduction, however, a fetus terminated with an injection of a chemical shrivels and is eventually absorbed by the mother’s body.

As a result, what is now the Japan Association of Obstetricians and Gynecologists pointed out in 1988 that reductions could amount to a breach of the procedure set forth for abortions.

An advisory panel with the Ministry of Health, Labor and Welfare concluded in 2003 that the procedure is justifiable for pregnancies with triplets or more.

A review panel with the Japan Medical Association endorsed in 2007 the need to perform multifetal reductions in some instances, saying reductions can be interpreted as an exceptional case of abortion.

But little progress has been made about setting rules on the procedure over the past years.

Osamu Ishihara, professor of obstetrics and gynecology at Saitama Medical University, said multiple fetuses are often produced through in-vitro fertilization and the use of ovulation-inducing drugs.

In in-vitro fertilization, transferring more than a single fertilized egg to the womb to increase chances of conception often results in a pregnancy with multiple fetuses.

But such incidences are said to have significantly declined after the Japan Society of Obstetrics and Gynecology issued an advisory in 2008, recommending the transfer of only one fertilized egg, in principle.

As for the use of ovulation-inducing drugs, medical experts said there is a certain ratio of women who are genetically prone to multiple ovulations.

As ultrasound technology can capture ovarian follicular growth, Ishihara said doctors should advise patients to avoid getting pregnant when there are indications of releasing more than one egg during ovulation.

Yasunori Yoshimura, professor emeritus of obstetrics and gynecology at Keio University, who served as the head of the Japan Society of Obstetrics and Gynecology, called for compiling reduction guidelines soon to alleviate the unease felt by couples seeking or having chosen a reduction procedure.

“We should present the acceptable criteria after trying to reach a consensus through societal discussions about the issue,” he said. “That would enable couples to make an informed choice.”

The absence of detailed guidelines led another woman in Osaka Prefecture who conceived quintuplets to take her case in court.

The woman, who is in her 30s, underwent a procedure to give birth to twins at a maternity clinic in 2015.

After the reduction, she suffered abnormal vaginal breeding and subsequently had a miscarriage of the remaining fetuses in September 2015, three months after she was found pregnant with quintuplets. The couple sought 23.4 million yen ($215,000) in damages.

In a ruling in January 2020, the Osaka District Court dismissed the case, saying, “The doctor who performed the procedure was not necessarily to blame for her miscarriage as medical expertise of the reduction has yet to be established.”

But the Osaka High Court in December the same year overturned the district court decision, ordering the clinic to pay 550,000 yen to the couple.

The high court acknowledged the danger of inserting a needle more than 1.6 millimeters across in the woman’s abdomen about 30 times to inject potassium chloride in the reduction procedure.

The court said the procedure is illegal as they failed to take precautions to ensure the safety of the patient.

“There is no rationality in doing the procedure by choosing a larger needle to repeatedly insert in the abdomen,” the court said.

The court cited guidelines for reductions in more than 10 countries, including the United States and European countries, as well as research papers published in Japan on the procedure.

But the plaintiffs appealed the decision to the Supreme Court as the high court did not recognize that the procedure was responsible for her miscarriage.

(This article was written by Takashi Endo and Nami Sugiura.)