In abrupt shift, 3 more prefectures tapped for state of emergency 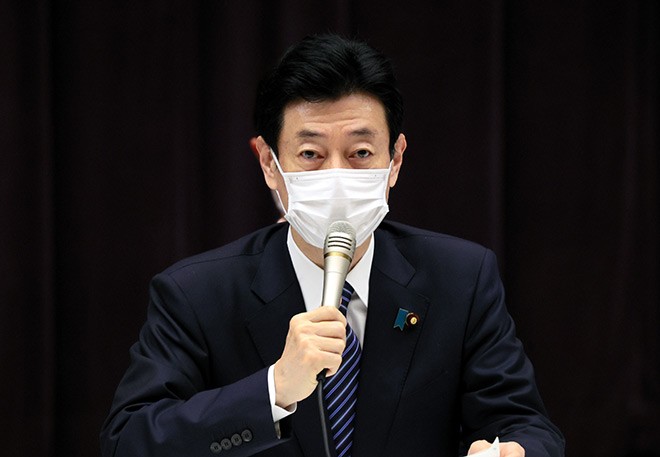 Yasutoshi Nishimura, who heads the central government’s efforts in dealing with the COVID-19 crisis, will attend the government’s expert subcommittee meeting in Tokyo on May 14. (Hikaru Uchida)

The government suddenly changed its plans and decided to add Hokkaido, Okayama and Hiroshima to the list of prefectures under the COVID-19 state of emergency from May 16 to 31.

Under the initial proposal made the previous day, the government planned to apply pre-emergency measures in the five prefectures of Gunma, Ishikawa, Okayama, Hiroshima and Kumamoto to stem the spread of the novel coronavirus.

However, infections are rising across the nation, particularly in Hokkaido, Okayama and Hiroshima prefectures.

Hokkaido has already been placed under the pre-emergency measures, but new COVID-19 cases there continue to increase, reaching a daily record of 712 on May 13, including 499 in the capital of Sapporo.

The Hokkaido government has asked the central government to issue the state of emergency for Sapporo.

The pre-emergency measures will still be issued for Gunma, Ishikawa and Kumamoto prefectures. These anti-virus measures will apply from May 16 to June 13, according to the new plan.

Earlier this month, the state of emergency was extended until May 31 for Tokyo, Osaka, Hyogo and Kyoto prefectures. It also covers Aichi and Fukuoka prefectures.

The initial proposal was made at a May 13 ministerial meeting that was attended by Prime Minister Yoshihide Suga and health minister Norihisa Tamura.

Kazuhiro Tateda, a member of the expert panel and a professor at Toho University, explained how things changed.

“I repeatedly said that no matter how you looked at Hokkaido, the situation is serious, and Okayama and Hiroshima, too,” he told reporters after the meeting on May 14. “I am glad that the government’s proposal was changed.”

Tateda said other panel members also described Hokkaido, Okayama and Hiroshima prefectures as being in a serious situation, and that they should be immediately placed under the state of emergency.

Yasutoshi Nishimura, who heads the central government’s efforts in dealing with the COVID-19 crisis, listened to the panel’s opinions, Tateda said.

“Nishimura then left for a Cabinet meeting and talked about it with Suga there,” he said. “Nishimura came back here and said that he would submit a new proposal.”

Under the state of emergency, businesses that serve alcohol, provide karaoke services or allow customers to bring in alcohol are asked to close their operations.

That request, however, was eased for commercial outlets with a floor space of 1,000 square meters or more. They are allowed to stay open until 8 p.m.

Venues for sports and other performances are asked to end such events by 9 p.m. Under eased rules, the venues can be filled to 50 percent of capacity, but only up to 5,000 people.

Governors facing still high numbers of new cases have been given more flexibility on the measures, such as whether to continue asking large commercial outlets to shut operations and imposing more restrictions on events.

The central government plans to restrict the business closure request in Hokkaido to areas where the local government was planning to apply pre-emergency measures.

The pre-emergency measures are intended to prevent prefectures from entering the most serious stage 4 situation, which indicates an explosive growth in infections and would place them under a state of emergency.

Categories in the 4-stage scale include hospital bed capacity.