Sri Lankan who died in detention recommended to be hospitalized 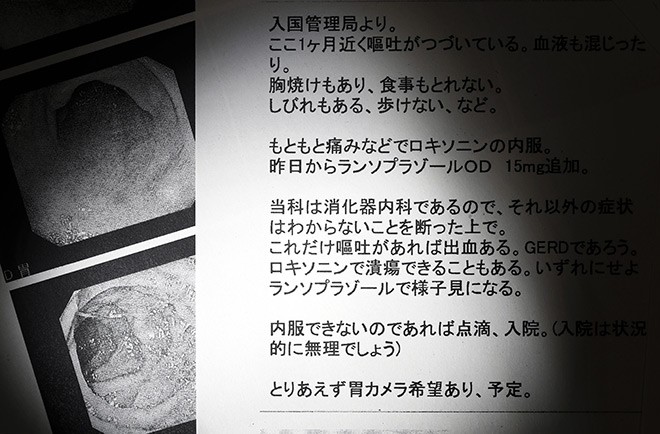 Medical records of the Sri Lankan woman who died at an immigration detention facility in March contradict the interim report released by the Justice Ministry’s Immigration Services Agency of Japan in April.

A doctor wrote in early February that Wishma Sandamali, 33, required “IV or hospitalization if she can’t take (medications) orally,” according to medical records obtained by The Asahi Shimbun.

That contradicts the interim report, released on April 9, which said the doctor “never gave an instruction for an IV or hospitalization.”

According to upper endoscopy test results and other reports by a gastroenterologist who saw Sandamali, she was frequently vomiting.

The doctor suspected she had reflux esophagitis.

Based on the frequency of her vomiting, the doctor suspected she also was suffering from internal bleeding. The doctor wrote he would prescribe Sandamali an acid-reducing medication and follow up on how she felt afterward.

A source related to the ministry admitted that the doctor wrote that in Sandamali’s medical records.

But the source said it was only “part of the course of examination.”

“Ultimately, the doctor’s judgment was to continue to administer medications inside the detention facility,” the source said. “There was no instruction for an IV or hospitalization.”

Sandamali came to Japan as a student in 2017.

But she became unable to pay her tuition and quit school in 2018. Her application to extend the length of her visa was denied. But she remained in Japan, overstaying her visa.

In August 2020, she reported an instance of violence by a person she was living with to police. She then received a deportation order and was detained at a facility operated by the Nagoya Regional Immigration Services Bureau.

She became ill around mid-January this year.

According to START, an organization that supports foreign nationals living in Japan, Sandamali showed up with a bucket when the organization’s staff visited her at the detention facility because she could not eat or walk and was frequently vomiting. She was also mentally stressed.

The staff worried about Sandamali’s poor health and repeatedly asked the bureau to let her be administered an IV. They also applied for provisional release for her, twice, after December 2020.

But Sandamali was not given an IV, nor provisional release. She died on March 6.

A psychiatrist recommended Sandamali for provisional release two days before her death.

But the interim report omitted the remarks. The agency said it did not include the recommendation in consideration of Sandamali’s honor and privacy.

Sandamali’s bereaved family said they have been left in the dark about the details of how she died.

Her death has become a rallying cry against a government-drafted bill that would revise Japan’s immigration law. Opposition lawmakers argue it would grant too much power to the agency.

(This article was written by Rei Kishitsu and Kazuya Ito.)