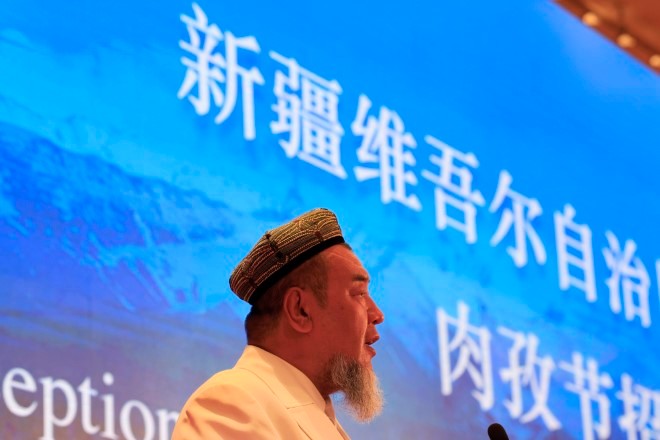 Abdureqip Tomurniyaz, who heads the association and the school for Islamic studies in Xinjiang, speaks during a government reception held for the Eid al-Fitr festival in Beijing on May 13. (AP Photo)

BEIJING--Muslim leaders from the Xinjiang region rejected Western allegations that China is suppressing religious freedom, speaking to foreign diplomats and media at a reception at the end of the holy month of Ramadan.

The event Thursday was the latest in a series of moves by the Chinese government to counter accusations of human rights abuses in Xinjiang. It came a day after human rights groups and Western nations met and demanded unfettered access for U.N. human rights experts to the region and U.S. Secretary of State Antony Blinken condemned China for “crimes against humanity and genocide against Muslim Uighurs” during the release of an annual report on international religious freedom.

The Uighurs are a mostly Muslim ethnic group in Xinjiang, a remote northwest region where China has been accused of mass incarcerations, forced labor and forced sterilization in recent years as it imposed a strict security regime after a series of militant attacks.

Echoing the government line, the president of the Xinjiang Islamic Association said China had eradicated the breeding ground for extremism by improving livelihoods, teaching people about the law and setting up vocational training and education centers. Foreign analysts say the centers are part of a detention system that has locked up an estimated 1 million people or more over time.

Abdureqip Tomurniyaz, who heads the association and the school for Islamic studies in Xinjiang, accused anti-China forces in the U.S. and other Western nations of spreading rumors and lies.

“They want to sabotage Xinjiang’s harmony and stability, contain China’s rise and alienate relations between China and Islamic countries,” he said.

He also said the U.S. is turning a blind eye to its own human rights violations, citing the U.S. involvement in conflicts in Iraq, Afghanistan and other Muslim countries and anti-Muslim discrimination at home.

Religious leaders from five mosques spoke at the 90-minute presentation, three in person and two by video. They all described prayers and feasting for Eid al-Fitr and rejected criticism of China's religious policies. Videos showed men praying inside mosques and people dancing in squares outside.

However, the Uighur Human Rights Project, a U.S.-based group, said in a report Thursday that it had documented at least 630 religious figures who have been detained or imprisoned in Xinjiang, most since 2014. The charges included illegal preaching and teaching religion to children, which is outlawed in China.

Mamat Juma, the imam of the historic Id Kah mosque in the city of Kashgar, said all ethnic groups in Xinjiang support the steps taken to combat terrorism. He said people are grateful to the ruling Communist Party for restoring stability and promoting economic growth.

At a daily briefing Thursday, Chinese Foreign Ministry spokesperson Hua Chunying said Wednesday's meeting of human rights groups and Western nations was based on “lies and political bias,” and accused participating nations of ignoring their own histories of prejudice and racism.

“The conference was full of monstrous lies and disinformation, and was another clumsy performance and outright political farce by the United States and a few other countries that have no bottom lines,” Hua said.

Hua said China was not denying unfettered access to Xinjiang for the U.N. High Commissioner for Human Rights because it had anything to hide, but because of the likelihood that any resulting reports would be distorted.

“I would like to ask that if someone falsely accuses and frames you with lies and then brutally and unreasonably demands you open your door unconditionally and allow them to go to your home and rummage through your closet, will you allow? This is not about facts, but about sovereignty and dignity,” Hua said.

“China welcomes all unbiased people from all countries to visit Xinjiang but is firmly opposed to so-called investigations that are based on rumors and lies and presumption of guilt,” Hua said.

Ahead of the meeting, China’s U.N. Mission sent notes to many of the U.N.’s 193 member nations urging them not to participate in the “anti-China event.” And China’s U.N. ambassador, Zhang Jun, sent text messages to the 15 Western co-sponsors of the meeting expressing shock at their support and urging them to “think twice” and withdraw it.

Zhang warned that if they didn't, it would be “harmful to our relationship and cooperation.”

At the meeting, British U.N. Ambassador Barbara Woodward called the situation in Xinjiang “one of the worst human rights crises of our time.”

“The evidence, from a growing number of credible sources--including satellite imagery, survivor testimony and publicly available Chinese government documents--is of grave concern,” said Woodward, who previously was the U.K. ambassador in China. “The evidence points to a program of repression of specific ethnic groups. Expressions of religion have been criminalized and Uighur language and culture are discriminated against systematically and at scale.”