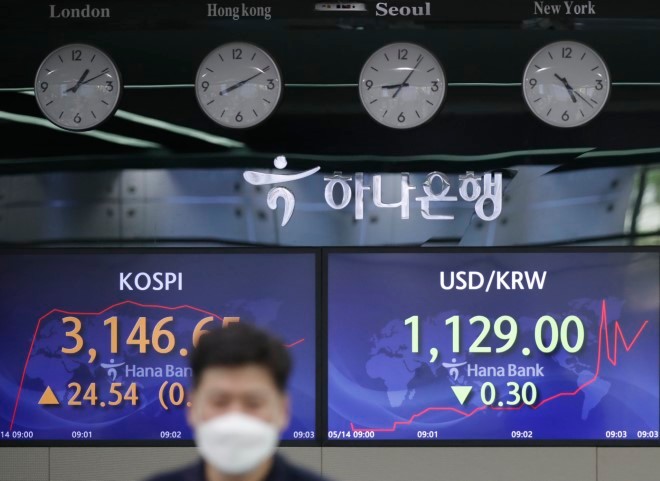 Shares in big semiconductor manufacturers led the advance in Asia, where almost all markets opened higher.

Japan’s Nikkei 225 added 1.8 percent to 27,940.90 and the Kospi in Seoul picked up 0.7 percent to 3,146.86, lifted by gains for Samsung Electronics and SK Hynix, which gained 1.9 percent and 1.3 percent after announcing plans to expand their investments in chip production and development.

Bitcoin added 2.1 percent to $49,390.00. Its price plunged 10 percent earlier this week after Tesla CEO Elon Musk reversed his earlier position on the digital currency and said the electric car maker would no longer accept it as payment.

Markets rallied as prices of key commodities such as copper, zinc and aluminum slipped, alleviating concerns over inflation that triggered sell-offs earlier in the week.

On Thursday, the S&P 500 notched a 1.2 percent gain, clawing back almost half of its loss from a day earlier, when it had its biggest one-day drop since February. Even so, the benchmark index is on track for a 2.8 percent weekly decline, which would be its largest since January. The other major indexes were also on pace for sharp weekly declines, despite recouping some of their losses.

Technology stocks led the gainers after sinking earlier in the week as investors fretted about signs of rising inflation. Apple, Microsoft, Facebook and Google’s parent company all rose. Financial companies also did well. JPMorgan Chase, Charles Schwab and Capital One Financial each rose more than 2 percent.

In a reversal from Wednesday, the energy sector was the only loser in the S&P 500 as oil prices fell sharply as the reopening of the Colonial Oil pipeline after a cyberattack eased concerns about supplies.

Investors have been questioning whether rising inflation will be something transitory, as the Federal Reserve has said, or something more durable that the Fed will have to address. The central bank has kept interest rates low to aid the recovery, but concerns are growing that it will have to shift its position if inflation starts running too hot.

Bond yields have risen sharply this week but pulled back slightly on Thursday. The yield on the 10-year Treasury note was 1.65 percent on Friday, compared with 1.70 percent on Wednesday.

The price of U.S. crude oil lost 18 cents to $63.63 per barrel in electronic trading on the New York Mercantile Exchange. It fell 3.4 percent on Thursday after the Colonial gasoline pipeline on the East Coast was reopened late Wednesday.

Brent crude, the international standard for pricing, lost 25 cents to $66.80 per barrel.