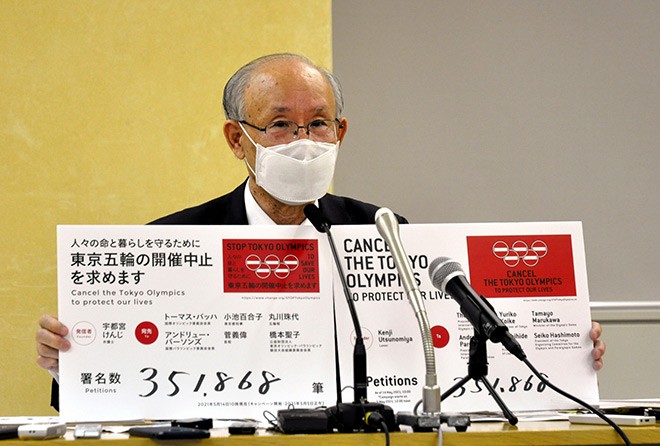 Kenji Utsunomiya at a news conference in Tokyo on May 14 says more than 350,000 people have signed an online petition demanding the cancellation of the Tokyo Olympics. (Rihito Karube)

Calls to cancel the Tokyo Summer Olympics are growing louder and more direct.

Olympic organizers are still pressing ahead with preparations, insisting that the event can be held in a safe environment.

But with 70 days to go before the Opening Ceremony, novel coronavirus infections are spreading around Japan, and the COVID-19 state of emergency is set to expand to three more prefectures.

Protesters, including medical personnel, say it’s time for someone in authority to make the tough decision to call off the potential “superspreader” event.

Kenji Utsunomiya, a 74-year-old lawyer, submitted a written request to Tokyo Governor Yuriko Koike on May 14 to do just that.

“The Olympics should be canceled to protect people’s lives and livelihoods,” he said at a news conference at the metropolitan government’s office building.

Utsunomiya, a former head of the Japan Federation of Bar Associations who ran against and lost to Koike in the gubernatorial election last summer, started an online petition on May 5 that had collected around 352,000 signatures as of noon May 14 from people who want the Games scrapped.

“I am very surprised that it has collected this many signatures in such a short period of time,” Utsunomiya said.

According to the petition site, Change.org, the signatories are from 133 countries, including 11,000 from Germany.

Utsunomiya pointed out that the number of COVID-19 patients with severe symptoms has been rising in Japan, and many are being denied proper treatment because of staffing and hospital bed shortages.

“By hosting this pompous event called the Olympics, valuable health care resources will be spent on (the Games), and people’s lives and livelihoods will be threatened,” he said.

Utsunomiya also noted that COVID-19 vaccines are not adequately available in many countries, and the pandemic has deprived some athletes of the opportunity to compete in qualifying events. The situation is causing disparities between developing countries and those in Europe and North America, where inoculations have progressed.

“We will not be able to have an Olympics that is fair,” he said.

A former table tennis player, Utsunomiya said he has conflicted feelings about voicing opposition against the Games out of consideration for the competitors.

“Thinking about the athletes who have worked hard for the Olympics, I feel sad asking for a cancellation of the Games,” he said.

A national union of doctors directed its calls to cancel the Olympics toward the Cabinet Office and the health ministry.

“This is a tough thing for the athletes, but somebody has to say it,” Naoto Ueyama, who heads the union, said at a May 13 news conference in Tokyo.

The union, established in 2009 to represent staff physicians, said a Tokyo variant of the novel coronavirus could be created if thousands of athletes and officials from around the world gather in the capital this summer.

Olympic organizers have already banned overseas spectators from attending the Games, and they are discussing the possibility of holding the events with no spectators.

But Ueyama said even the no-spectator measure would be insufficient.

“It is like a big tsunami is approaching, but they say, ‘It’s OK if we run to the second floor,’” he said.

Ueyama also criticized the plan to have Olympic athletes take a polymerase chain reaction (PCR) test every day, in principle, while they are in Japan.

“It has been said that testing in Japan needs to be expanded,” he said. “But there is not even regular testing for medical workers and caretakers.”

(This story is compiled from reports written by Rihito Karube and Shin Matsuura.)