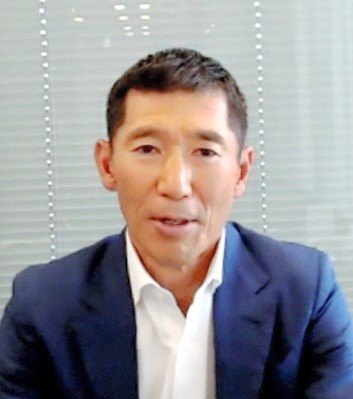 Yuji Sugimoto, who heads the Japanese arm of Bain Capital Private Equity, responds to question in an interview with The Asahi Shimbun. (Taiki Koide)

A major U.S. investment fund said it has no plans to sell its stake in a Japanese semiconductor company as the United States and China lock horns over dominance in the sector.

Bain Capital Private Equity, a U.S. investment fund that has offices around the world, holds a majority of Kioxia Holdings Corp.’s shares.

In an exclusive interview with The Asahi Shimbun, Yuji Sugimoto, who heads the Japanese arm of Bain Capital, dismissed the notion it has plans to sell off its stake.

Kioxia planned to list its shares on the Tokyo Stock Exchange in fall 2020, but the plan has been delayed.

Sugimoto said the listing process will be pushed forward as soon as possible.

According to Sugimoto, the current market in NAND flash memory chips is made up of six major companies, including Kioxia and Samsung, in the United States, Japan and South Korea. But he said there will likely be an amalgamation into a smaller number of companies.

“That amalgamation will not be easy because there are few options for companies to act based on just their own goals,” Sugimoto said. “No result will be produced unless governments become involved.”

He said various assessments that place Kioxia’s corporate value to the tune of 3 trillion yen ($27 billion) were “an appropriate evaluation since semiconductor demand is now increasing.”

Sugimoto also touched upon recent moves to acquire Toshiba, which still has a roughly 40-percent stake in Kioxia.

“We have absolutely no interest in acquiring Toshiba,” Sugimoto said.

He added that if Bain Capital had been considering such a move, it would have worked closely with Toshiba and the Japanese government because of national security concerns arising from Toshiba’s work with nuclear power plant technology.

“We cannot deny the sense of resistance that is directed toward foreign private equity firms such as us,” Sugimoto said. “Having the two Japanese firms involved leads to a sense of security among the local community and workers (at Hitachi Metals).”

The total amount involved in the buyout is about 900 billion yen.

Sugimoto said the key to growth for Hitachi Metals lies in whether it can develop technology for electric vehicles and other related efforts in moving toward a carbon neutral society.

He added Hitachi Metals would also be listed on a stock exchange as soon as possible once it boosts its corporate value even higher.

(This article was written by Taiki Koide and Yasuro Suzuki.)