New film ‘Along the Sea’ focuses on exploitation of foreign trainees 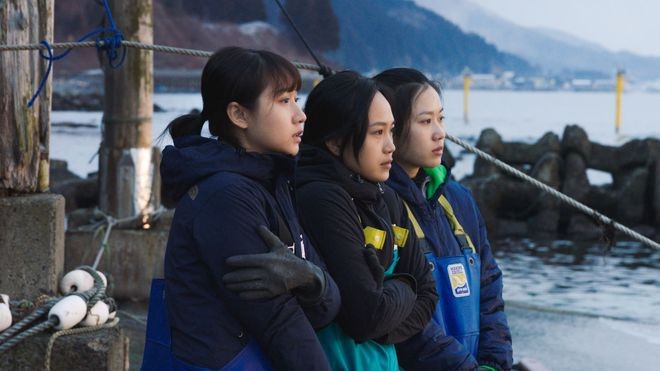 "Along the Sea" follows the lives of three Vietnamese women who escape from an exploitative workplace, aiming for a realistic portrayal of the perils many foreign technical trainees face while working in Japan.

The docudrama is built on gritty realism and was based on a true story.

About half of the trainees currently in Japan are Vietnamese.

In the film, the characters An, Nhu and Phuong escape their oppressive workplace after working there for three months.

They are then brought by a broker to a snowy port town, where they work at new jobs for their families back in their home country--all the while worrying about their illegal status here. But Phuong gets sick one day, and she has a secret she cannot reveal.

Director Akio Fujimoto came up with the project after learning of a haunting message sent to a social media account, jointly managed by his wife, who is from Myanmar, that was set up to disseminate information about Japanese visas.

"I want to escape right now," the message read. “I'm scared, but everyone else has escaped and I'm the only one still here.”

According to the director, the message was sent by a female technical trainee originally from Myanmar. She said she was forced to work from early morning until late at night at a factory in the Chubu region for 300 yen ($2.75) per hour.

Fujimoto tried hard to help, but he lost contact with her.

"She has remained stuck in my head for a long time," he said.

He interviewed staff members at shelters that support technical trainees so he could learn what their lives are like after they flee from their workplaces.

After learning how foreign trainees are left with but few choices to live like humans, Fujimoto said he felt obliged to dig deep into the issue and could not see it as simply being someone else's problem.

He related it back to his own life.

"My wife was expecting," he said. "Residency status is as unstable as a tightrope, and it is possible (for her) to not be allowed to stay in Japan for a long time when the system suddenly changes. And I also feared what would happen to our child if that became a reality."

The three Vietnamese actresses were selected through an audition.

They previously had careers as an actress, a model and a newscaster. One of them has an older sister who had worked in Taiwan.

Just like real foreign trainees, the trio studied at a Japanese language school in Vietnam before shooting scenes in Japan.

Fujimoto's previous film, "Passage of Life" (2018), is based on a true story about a family from Myanmar living in Japan. Like that story, his latest project also examines how Japanese people turn a blind eye to the lives of non-Japanese residents.

"I'd be happy if audience members think of the situation as their own problem, wondering why they are in Japan and why they have to escape," Fujimoto said.