VOX POPULI: Risky business of foraging for bamboo shoots in wilds of Akita 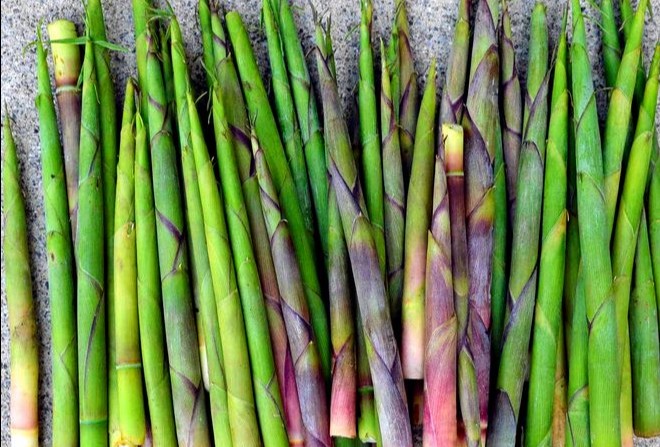 In the town of Kosaka in Akita Prefecture, mountain areas are now bursting with fresh green leaves and local produce stands have started selling bamboo shoots with their pale pink and green outer leaves still attached.

Locals call them "nemagaritake" (bamboo with bent roots) because the roots become bent under the weight of winter snow.

Among Japan's many "sansai" seasonal edible vegetables that grow in the wild, bamboo shoots are the most difficult to harvest.

"They are greatly loved not only by us humans, but by Asian black bears as well," said Natsuko Tanaka, 32, who runs an online sansai shopping site called Akita Mori no Takuhaibin (Akita forest home delivery service).

Around this season every year, 30 seniors who are expert hunters of bamboo shoots roam the mountains to ship freshly harvested shoots to all over Japan.

Nemagaritake thrive in dense thickets of bamboo grass. As hunters proceed crouched, practically on their hands and knees, they sometimes bump into bears that are also foraging for food.

To minimize this risk, the locals gird themselves with a blaring radio and bear-repellent bells around their hips.

Looking back on recent years, bear-related tragic news occurred without fail every year.

In Akita Prefecture, four men and a woman were killed five years ago in a series of bear attacks.

According to the Environment Ministry, fiscal 2020 registered the highest number of attacks on humans.

The locals are well aware of the risks they run, but they go into the mountains anyway for good reason.

In communities where depopulation and aging are irreversible, bamboo shoots are a precious source of income. In fact, some people are dependent on them for their livelihood.

Listening to their accounts, I struggled to think of a solution that will enable humans and bears to share nature's bounty without a fight.

I bought a nemagaritake from a produce stall, and boiled it at home. A sweet aroma, similar to that of corn, whetted my appetite.

Savoring "takenoko-jiru" (bamboo shoot soup), I was filled with gratitude for the master hunters of bamboo shoots of the Tohoku region.

I could imagine hearing their footfalls on the pristine snow and the tinkling of their bear-repellent bells echoing deep in my ears.