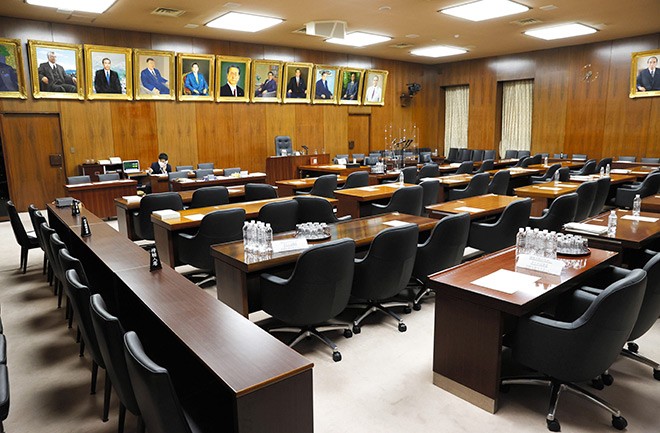 The meeting room of the Lower House Judicial Affairs Committee remains empty on May 14 after a breakdown in talks meant that no vote would be held on legislation to revise the Immigration Control and Refugee Recognition Law. (Ryo Ikeda)

The government brushed aside opposition calls to release further information on the death of a Sri Lankan woman in an immigration detention facility and forged ahead May 14 with plans to revise the Immigration Control and Refugee Recognition Law without amendments.

The proposed legislation has drawn sharp criticism from groups providing support to refugee applicants as well as legal scholars, who contend it could potentially make things harder for applicants seeking refugee status.

Representatives of the ruling Liberal Democratic Party and main opposition Constitutional Democratic Party of Japan met periodically May 14 in hopes of hammering out a compromise on the legislation that would change the manner in which refugee cases are handled.

At one point late in the afternoon of May 14, the directors of the two parties in the Lower House Judicial Affairs Committee reached an agreement in principle and referred the matter to the chairmen of the Diet Affairs Committee of the LDP and CDP.

It was then that Jun Azumi, the CDP chairman, demanded that the government release video of Wishma Sandamali, 33, who died on March 6 while detained at a facility operated by the Nagoya Regional Immigration Services Bureau.

Azumi later told reporters he made the request because the Justice Ministry had refused repeated past demands for the release of the video of Sandamali’s time at the facility.

“We could not go along with a vote on the legislation under such circumstances,” Azumi said.

The ruling coalition now plans to vote on the legislation as it was first proposed without taking into consideration any of the proposed changes submitted by the CDP. A vote in the committee could come as soon as May 18 after the opposition motion is defeated.

Sandamali's family and groups that supported her are also demanding answers into her death as discrepancies have emerged between her medical records and the explanation given by the Nagoya detention facility officials.