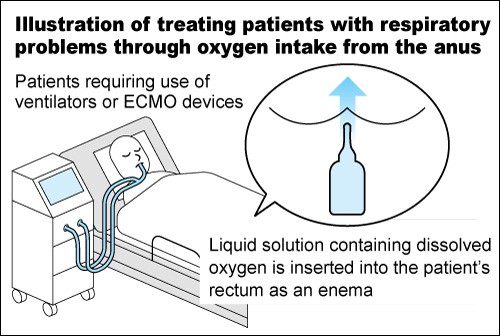 Forget applying an oxygen mask to the face, say researchers seeking ways to better treat those with serious respiratory problems.

Their solution: via the anus.

A team made up of researchers from Tokyo Medical and Dental University, Nagoya University and Kyoto University on May 15 released the results of tests on mice and pigs.

The researchers are now working to develop this new way of supplying oxygen to patients with serious respiratory problems to avoid the use of ventilators or extracorporeal membrane oxygenation (ECMO) devices, which can exact a heavy physical toll.

Loaches are known to absorb oxygen through the rectum when in a low-oxygen environment.

Mammal rectums are known for having a high blood flow that makes it easier for the body to ingest drugs.

That led the team to try inserting oxygen directly into the rectums of mice and pigs as well as injecting liquid solutions containing high levels of dissolved oxygen into their backsides.

One experiment involved placing mice in a low-oxygen environment where the animal would suffocate in five minutes if nothing was done. When oxygen was injected into the rectum, the animal survived for twice the expected time. The survival time extended to about an hour when the mucus membrane of the bowels was removed before the oxygen was injected.

The level of oxygen in the blood of the animals increased as well.

Respiratory problems were also relieved when the liquid solution with dissolved oxygen was injected.

Similar results were also obtained in pigs and no serious complications were found in the liver, spleen and intestinal tract.

The researchers are contemplating using an enema made up of liquid solutions containing dissolved oxygen in future experiments on human patients.

“The only options for treating not only the novel coronavirus but various lung illnesses was to use ventilators or ECMO devices, but this could lead to an increase in alternatives,” said Takanori Takebe, a professor of health care sciences at Tokyo Medical and Dental University who is a part of the study.

The team hopes to begin clinical tests within the next year or two to gain approval as a medical device of the liquid known as “perfluorocarbon,” which is not toxic and in which large volumes of oxygen can be dissolved.

The team has dubbed its new method of supplying oxygen “EVA (enteral ventilation via anus).”

Takebe said the name was partly inspired by the popular Evangelion anime series in which a character breathes using a liquid solution.