Tokyo to consult with Seoul over radioactive water release 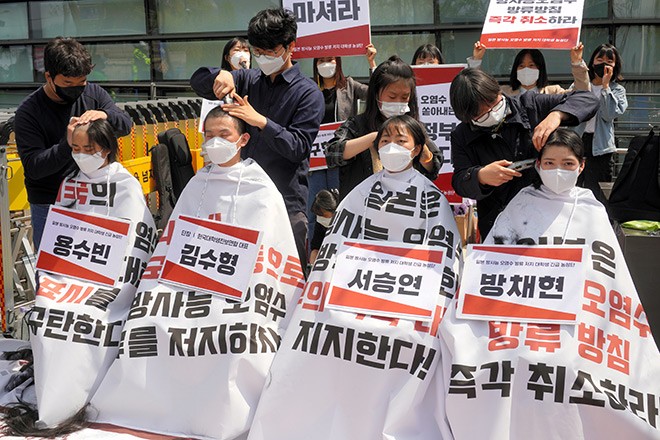 College students have their heads shaved in front of the Japanese Embassy in Seoul on April 20 to express their anger over the Japanese government’s plan to release treated radioactive water from the crippled Fukushima No. 1 nuclear power plant into the sea. (Takuya Suzuki)

SEOUL--Japan is set to accept a South Korean proposal to establish a forum to discuss safety issues concerning its decision to discharge more than 1 million tons of treated contaminated water from the crippled Fukushima No 1 nuclear plant into the sea, sources said.

The development follows a public uproar in South Korea, which prompted Seoul to contact Tokyo to formally set up a procedure for consultations.

Japan’s Agency for Natural Resources and Energy, an arm of the Ministry of Economy, Trade and Industry agency overseeing the decommissioning of the stricken plant, is expected to be among entities to attend the forum, the sources said.

The South Korean government is calling on experts to join the forum, not just those with diplomatic status.

Tokyo will also consider participation in the forum by the Secretariat of the Nuclear Regulation Authority, the Japanese government’s nuclear watchdog, as well as Tokyo Electric Power Co., operator of the Fukushima facility that went into a triple meltdown in the aftermath of the 2011 earthquake and tsunami disaster, the sources said.

South Korea’s Foreign Ministry acknowledged to reporters May 14 that Seoul was mulling the creation of a forum with Japan to convey concerns raised about the release of treated, but still radioactive water from the plant and glean more details about what will be involved.

Seoul also called for inspections of the water by the International Atomic Energy Agency to which it has obligations as a member state.

Japanese diplomats had briefed their South Korean counterparts on the plan to alleviate any possible concerns before Japan's decision last month.

They explained that the water will be discharged into the ocean after being treated to bring levels of radioactive substances to below those of water released from a regular operational nuclear power plant.

The Japanese side believed that it had put South Korean concerns to rest.

However, Seoul promptly lodged a strong protest with Tokyo after a fierce outcry among the South Korean public.

The decision to release 1.25 million tons of radioactive water into the ocean is result of TEPCO running out of space for storage tanks holding polluted water. It said the plant will reach its capacity in autumn 2022.

Disposal of the water is expected to start in two years and continue over decades.