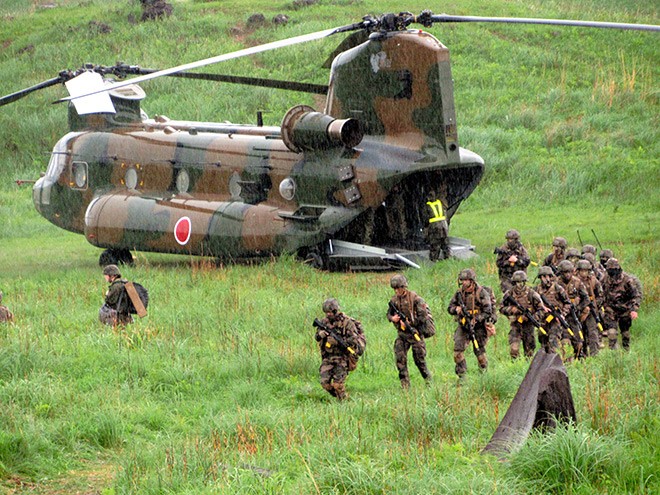 French, Japanese and U.S. troops advance after disembarking from a Ground Self-Defense Force helicopter at the Kirishima training area straddling Kagoshima and Miyazaki prefectures on May 15. (Sunao Gushiken)

The military drills reflect growing concern about Beijing’s assertiveness in the South and East China seas.

France, which was invited to join the exercise after approaching Japan and the United States, is apparently trying to raise its profile and show it can protect its overseas territories in the Indo-Pacific region.

Dozens of troops battled pouring rain as they made their way to highland in the Kirishima training area carrying rifles and other gear.

However, bad weather forced a change in the scheduled exercise.

Four MV-22 Osprey aircraft used by the U.S. military pulled out. They were originally supposed to take off from the Maritime SDF’s Kanoya base in Kagoshima Prefecture to carry out an operation dubbed heliborne.

The same day, groups opposing the exercises held a protest rally in Ebino, Miyazaki Prefecture, and elsewhere, chanting that peace cannot be achieved with the use of armed force.

The tripartite drills began May 11 and will end May 17.

Aside from the Kirishima training area, drills were expected to be held at Camp Ainoura in Sasebo, Nagasaki Prefecture, and in western sea space off the Kyushu region.

About 100 GSDF troops, 60 U.S. Marines and 60 members of the French army took part in the training.

During the May 15 exercise, troops fired blanks in a simulation of urban warfare after descending from helicopters.

They are scheduled to engage in shooting practice at point blank range and other drills by the last day of the session.

The joint drills coincided with the dispatch of France’s Jeanne d’Arc training fleet to waters near Japan.

The three countries also collaborated over holding another joint drill in the sea near Japan during the same period, with the Australian navy taking part.

The ground and sea exercises are intended to underscore Japan’s efforts to achieve its vision of a free and open Indo-Pacific.

“While bolstering ties with other countries, we are determined to keep sending out the message that Japan is committed to continuing to contribute to peace and stability of the local region as well as the world,” Masashi Hiraki, a GSDF colonel, said at a joint news conference.

New Caledonia and other islands in the South Pacific are among France's overseas possessions. Joining the exercises was clearly aimed at highlighting its strategic interests in the region.

The chief of the French unit said staging amphibious drills was extremely important for France as a nation with territories in the Pacific.

China criticized the joint drills earlier this month, with a foreign ministry official describing them as an approach that reverses the global trend of peaceful prosperity and collaboration.