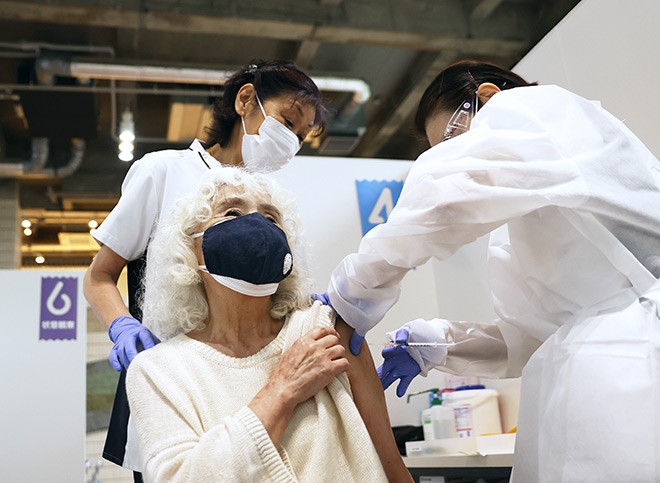 A woman receives a vaccine jab against the novel coronavirus at a university facility in Tokyo’s Sumida Ward on May 13. (Asahi Shimbun file photo)

Tokyo on May 16 confirmed 542 new COVID-19 cases, while Aichi Prefecture reported 522, the highest for a Sunday.

In Osaka Prefecture, 620 new infections and 15 deaths were confirmed.

There were 61 new patients aged 65 or older.

The number of serious cases stood at 84, down one from the previous day. Tokyo defines serious cases as those requiring a ventilator or an extracorporeal membrane oxygenation (ECMO) device, which circulates blood through an artificial lung.

In Aichi Prefecture, the number of new infections exceeded the 500 mark for the sixth consecutive day through May 16. Of the 522 new cases, 210 were confirmed in Nagoya.

The state of emergency covers Tokyo and eight prefectures, including Aichi, through the end of May.

In addition, quasi-emergency anti-virus measures are in place in 10 prefectures.