Video warns drivers that only ninja can cross road unharmed 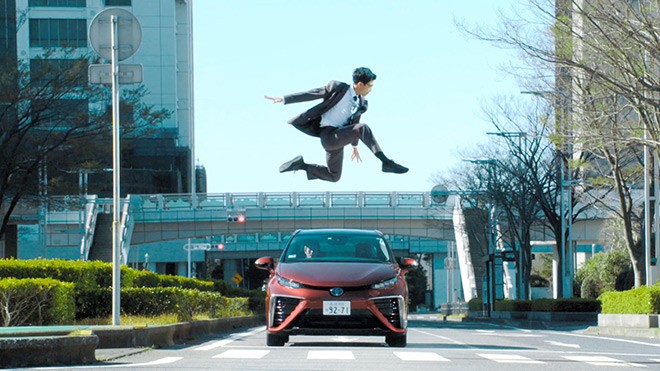 An office worker in a suit jumps over an oncoming vehicle at a crosswalk in the “Road to Ninja” video. (Provided by Okayama Toyopet)

OKAYAMA--To make it across the street alive and with all limbs intact, you’ve literally got to be a ninja in Japan even in this day and age.

That’s because an overwhelming majority of drivers refuse to stop at crosswalks and give pedestrians the right of way, according to a car dealer here.

A Japan Automobile Federation survey conducted last year found only 21.3 percent of vehicles yield to pedestrians at crossings with no traffic signals. Okayama Prefecture ranks third-worst in the nation at 7.1 percent.

The grim statistics drove Okayama Toyopet to create “Road to Ninja,” a 90-second video that takes a cynical look at how far pedestrians should go to dodge inconsiderate motorists.

The footage depicts a male office worker in a suit, a small kid and an elderly person, all sprinting across streets while pulling off acrobatic stunts reminiscent of the feudal-era undercover agents who the company says are “among the symbols of Japanese culture.”

“If you can’t do this much, you won’t be able to cross (the road) forever,” says a high school girl, who performs a back handspring in a school corridor.

To coincide with a nationwide spring safety campaign, Okayama Toyopet posted “Road to Ninja” on its website and YouTube.

The video (https://www.oktp.jp/ichiokusouninjanokuni/), which comes with some English subtitles, has racked up nearly 300,000 YouTube views.

“We’d like many people to check the video out and abide by the pedestrian-first rule at crosswalks,” said Kazunori Suenaga, the company’s president.

Ninja expert Yuji Yamada said he expects the video to encourage people to learn ninja’s spirit of patience and drive their vehicles in a relaxed manner.

“People overseas think there are still many ninja in Japan,” said Yamada, a history professor at Mie University. “The video makes a strong impact on viewers, taking advantage of the common misunderstanding.”

The university’s Faculty of Humanities, Law and Economics offers a specialized course at its graduate school where students can study ninja and their techniques.