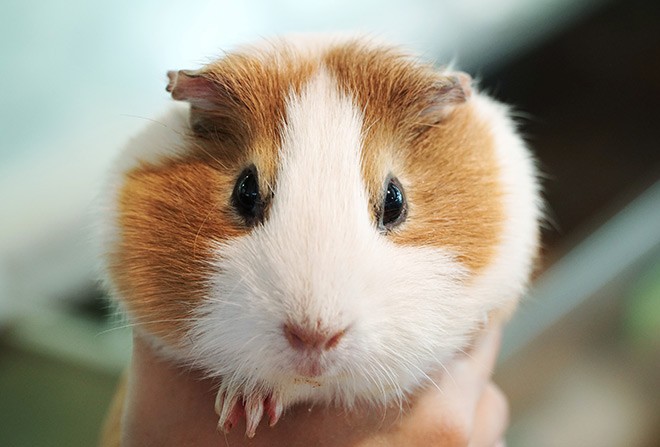 Guinea pigs, with their cute faces and round bodies, are adorable animals. But seeing 220 guinea pigs together in one place? Prepare to be overwhelmed.

At feeding time at Hamura Zoo in Hamura, western Tokyo, a chorus of whistling rose from the guinea pigs, which began munching on cabbage and other tidbits as soon as a partition separating them from their meals opened.

Whistling loudly means they’re excited or want something. When they want to be spoiled, they purr quietly in short spurts, and when they’re feeling cautious or uneasy, they growl in a low tone.

Guinea pigs were domesticated from a member of the cavy family living in the wild in Peru, Argentina and other parts of South America.

Unlike rabbits and hamsters, they have no cheek pouches or tail.

It is said that they inherently live in groups and are timid and cautious. But each has its own personality, and some are friendly to people.

Hamura Zoo has named all its guinea pigs, many after food items such as Koppepan (hot dog bun) and Creampan (cream bun).

Zoo staff can recognize each one based on the color, texture and patterns of its fur, size and other details, Hasegawa said. However, it’s difficult to tell the difference between albino ones, she added.