SDF jets stand in to assess noise of U.S. training on southern island 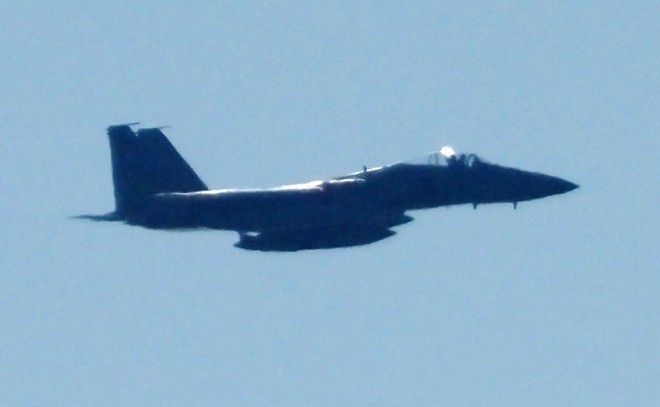 NISHINOOMOTE, Kagoshima Prefecture--Seven Self-Defense Forces' F-15s stood in for U.S. fighter jets to measure noise of U.S. carrier-based aircraft on May 16 that will relocate here for flight training, amid local concerns over the sound levels.

The Defense Ministry is planning to relocate the U.S. military’s landing practice site from Iwoto island, also known as Iwojima, south of Tokyo, to Mageshima island, which lies off Nishinoomote city.

But some local residents doubted the tests done by the ministry would be accurate as they were being carried out using the SDF's F-15 fighter jets instead of U.S. military aircraft.

The SDF fighter jets did not perform “touch-and-go” landing exercises but increased engine power when flying over the uninhabited island.

Actual touch-and-go landing practice would cause much greater noise than the demonstration flights, said Nishinoomote Mayor Shunsuke Yaita, who is opposing the relocation plan.

“The demonstration flights were not exactly the same as the planned U.S. military’s flight training, but I hope they will help local residents decide whether to accept the plan,” said Kagoshima Governor Koichi Shiota, who watched the flights from the roof of the prefectural government’s branch office in Nishinoomote on nearby Tanegashima island.

The U.S. military will likely carry out training exercises on Mageshima island from the daytime through around 3 a.m. for 10 to 20 days a year under the relocation plan.

During the demo flights, five SDF fighter jets flew between 3:30 p.m. and 4:30 p.m., and two between 6 p.m. and 7 p.m. They took four to eight flight routes expected to be used during the military’s landing and takeoff practices.

The ministry measured noise levels at 14 locations in six cities and towns near the island and will later release the results.