From Beatles to U2, ‘rock’ book shows life work of photographer 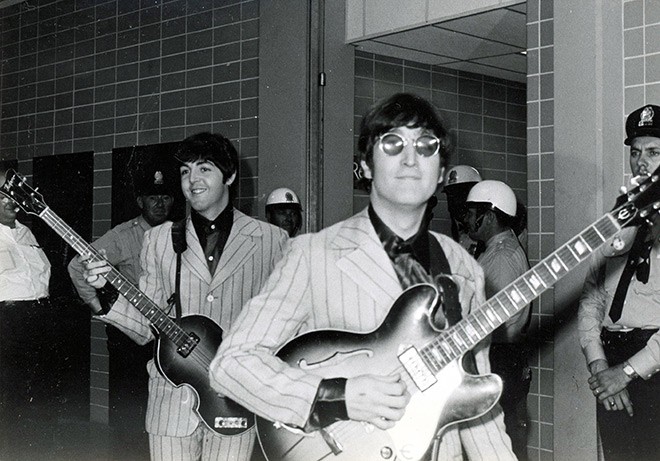 Koh Hasebe was unfamiliar with the subject matter of an assignment in 1965 that led to his 40-plus-year career as perhaps Japan’s most prolific photographer of rock ’n’ roll royalty.

“At the time, I didn’t know who the Beatles were,” he recalled.

Through that assignment, Hasebe became the first Japanese photographer to capture the Fab Four. He is also known for taking the most pictures of another legendary British group, Queen.

Hasebe, 91, published the culmination of his life’s work, “Rock the Best,” in April. It features more than 540 photos of 239 musicians and groups handpicked from his pictures taken between 1953 and 1997.

In 1965, Shoichi Kusano, president of the predecessor of Shinko Music Entertainment Co., asked Hasebe to take photos of the Beatles. Hasebe had relocated to Paris to avoid the hustle-and-bustle of the Tokyo Olympics the previous year.

He had worked as a photographer mainly for a film magazine to take pictures of famous faces. But he decided to leave Japan when the industry started to decline after television broadcasting began.

Not knowing who the Beatles were, Hasebe watched “A Hard Day’s Night,” the first film starring the band, at a Paris cinema. He couldn’t hear the dialogue because of all the shouting and screeching from the audience. But he realized just how popular the band was.

Hasebe took their photos at a studio in London on June 15 that year.

“I think they had never seen Japanese people before,” he said.

The band members looked curiously at the kimono of a female editor who accompanied Hasebe on the photo shoot.

They asked her what she would put inside the sleeve pouch and whether she was feeling squeezed by such a broad “obi” belt.

When artists were making music, Hasebe ensured he took photos without them noticing him. He stood at a distance and used a telephoto lens so that they wouldn’t even hear the shutter sound.

He approached his subjects only when they were on a break.

Hasebe said the self-made rules he had followed when he took photos of Japanese movie stars helped him in music industry assignments.

He took more photos of the Beatles when they were on a U.S. tour and when they performed in Japan.

One of his photos taken at a Tokyo hotel in 1966 shows John Lennon imitating the well-known pose of a character from a 1960s comedy manga.

When Lennon asked what was popular among children in Japan, Rumiko Hoshika, then editor-in-chief of Music Life, showed him the antic.

“John was still childlike at the time,” Hasebe said.

During the Beatles’ concerts in Japan, Hasebe stayed in a hotel room just one floor below theirs for more than a week, waiting for photo opportunities.

“If your job is to take photos of stars, you must wait,” he said.

He started taking photos of Queen when they toured Japan for the first time in 1975. The cover photo for the band’s “Live Killers” album was shot by Hasebe.

The photographer has never asked his subjects to “smile” or make facial expressions for his photos, although he sometimes requested that they take a step back when they started relaxing after several photos were taken.

“No musician can be free from feeling the presence of the camera,” Hasebe said. “But they will look natural with the slightest of opportunities. You can never take good photos if you miss that chance.”