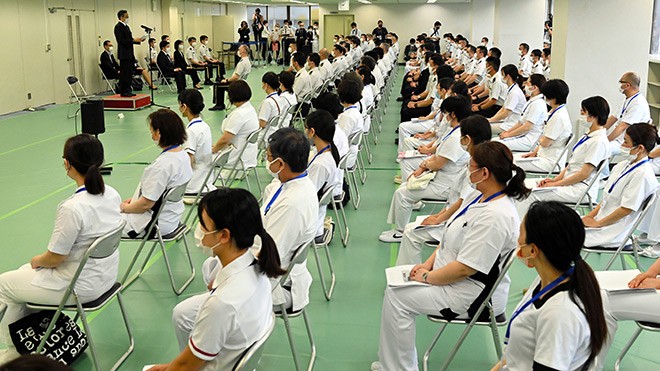 Health care workers with the Self-Defense Forces and the private sector attend a ceremony marking the creation of a mass vaccination center in Tokyo’s Chiyoda Ward on May 17. (Sayuri Ide)

Senior citizens snapped up appointments for Tokyo and Osaka's planned mass COVID-19 vaccinations as the Defense Ministry debuted online reservations for jabs on May 17.

All 25,000 slots at the Osaka site had been booked 26 minutes after reservations were accepted, from around 1 p.m.

People age 65 or older who have received a vaccination slip issued by their local governments can make reservations for the first dose only. They will be notified about the schedule for their second dose when they show up for the first shot.

The slots made available on May 17 are expected to cover the vaccinations over a week from May 24, when the Tokyo and Osaka centers are scheduled to open.

Japan has a population of 36 million who are 65 or older, designated a priority group for vaccination. Immunization of senior citizens has been under way under a program implemented by local governments.

People in that age group, in Tokyo’s 23 wards and Osaka, are eligible for doses at the two sites, which will be operated by the Self-Defense Forces.

While the central government intends to accelerate inoculations through the mass vaccination centers, it cautioned the public against double bookings as central and local government systems were not linked up.

“As our systems are not equipped to remove double bookings, people seeking vaccinations at the SDF mass vaccination centers should make sure that they have not booked for doses provided by their local authorities,” Chief Cabinet Secretary Katsunobu Kato said on May 17.

Bookings are accepted online only through dedicated sites and through the SDF's account on the Line messaging app. SDF medical staff will administer doses of U.S. drugmaker Moderna Inc.’s vaccine at the two sites over about three months.

Applicants, to secure their appointments, need to type in a number assigned to each individual by local governments.

To prevent the booking sites from crashing due to floods of reservations, applicants for the Tokyo venue were limited to residents of the capital's 23 wards and to Osaka at the Osaka site.

Elderly people in other parts of Tokyo and Osaka Prefecture, in addition to those in Tokyo's 23 wards and Osaka, will be allowed to book slots from May 24 for doses to be administered between May 31 and June 6.

From May 31, senior citizens in Saitama, Chiba, and Kanagawa prefectures can secure their appointments for the Tokyo center and those in Kyoto and Hyogo prefectures may book them for the Osaka center. The shots for those bookings will be given from June 7 to June 13.