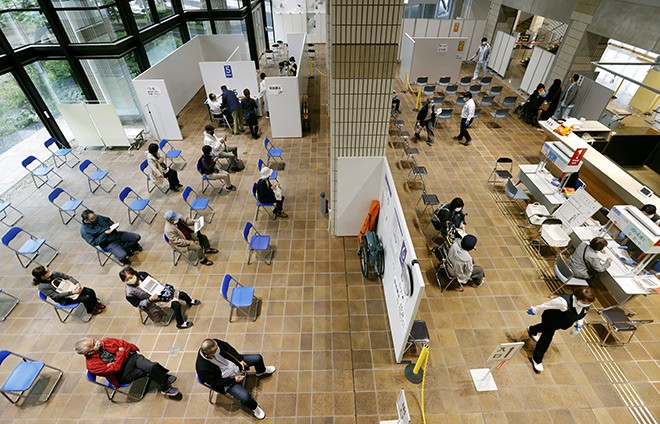 Japan will likely need to issue four more emergency declarations by April 2022 if its COVID-19 vaccination program does not significantly pick up the pace, experts warn.

Researchers have crunched the numbers and are now calling on the government to inoculate citizens four times faster than the current speed to bring the pandemic under control.

The study was done by Yasuharu Tokuda, who heads the Muribushi Okinawa Center for Teaching Hospitals, and Toshikazu Kuniya, an associate professor of mathematical biology at Kobe University.

“The results of simulations may vary depending on other anti-virus measures, but the speed of inoculations still needs to be greatly accelerated,” Tokuda said. “I want the government to swiftly create an environment to realize that.”

The researchers based their calculations on data of COVID-19 cases reported between Jan. 14, 2020, and April 20 this year, assuming that the government will issue a fresh state of emergency when the daily number of new infections tops 5,000 nationwide and will then lift the emergency declaration once the count dips below 1,000.

Using a mathematical model, the researchers estimated what the infection situation will look like if the vaccine rollout continues at the pace seen around mid-April, when about 220,000 shots were being administered per day.

They also took into account the spread of coronavirus variants.

If the speed of the vaccination program remains unchanged, daily cases would exceed 5,000 around July, forcing the government to issue a state of emergency four more times by April next year, the study results showed.

Even if people receive jabs twice as fast as that, three additional emergency declarations would still be needed. If the vaccination speed is four times as fast, the government would still have to issue another state of emergency around the end of July. But it would not likely face a surge in new infections after that.

Administering 1 million shots a day is believed to be more than enough to vaccinate people four times faster than the current pace.

The researchers published their modeling before the study was peer-reviewed to make the results quickly available to the public. The figures are available at: https://www.medrxiv.org/content/10.1101/2021.05.06.21256476v1.full-text