EDITORIAL: COVID-19 patients should be allowed to vote by mail-in ballot 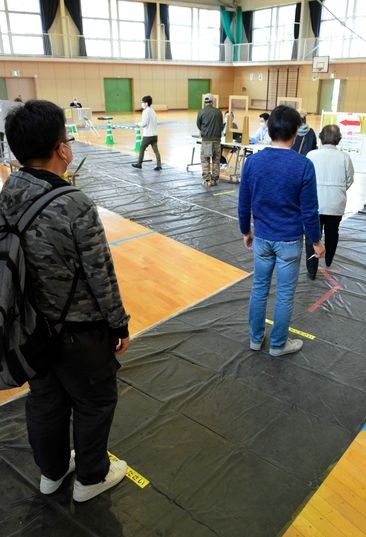 Voters maintain a safe distance while waiting to cast a ballot at a polling station in Nagano in the Upper House by-election on April 25. (Asahi Shimbun file photo)

The new coronavirus pandemic has had various effects on elections, key instruments of democracy.

Despite the public health crisis, however, no scheduled national or local elections have been canceled or postponed in Japan over the past year, even in areas under a COVID-19 state of emergency.

A wide range of measures have been taken to prevent infections through elections. To preclude crowded situations on election days, for example, the early voting system has been expanded.

Antiseptic solutions are made available at polling places, while pencils placed at voting booths for filling out ballots are collected every time they are used.

Despite all these efforts, however, many voters apparently have been uneasy about visiting voting sites to cast ballots. Voter turnout has been generally lower than usual, although turnout rates have been affected by the political situations surrounding the elections.

High abstention rates could undermine the legitimacy of elections as expressions of the public will. Election administration commissions across the nation should take all measures possible to ensure that more voters can cast ballots with a sense of safety and help the public know and understand the measures.

As the nation has long remained under the grip of the virus, a new election-related issue has emerged. Infected people who are trying to recover at designated hotels or their own homes cannot vote because of restrictions on outings.

This is a situation that must be quickly rectified because it means these people cannot exercise their constitutionally guaranteed right to vote.

In national elections held last month, measures were taken to allow people recovering at hotels to exercise the right through early or absentee voting.

During the Upper House by-election in the Hiroshima district, a polling station was set up at each of the four designated hotels for one day. The makeshift voting places were used by 14 of the 108 voters staying at these hotels to cast ballots.

In the Upper House by-election in the Nagano district, an outdoor voting place using a makeshift tent was set up near each of the four designated hotels. Dedicated cars were used to shuttle four voters to and from the sites, one at a time.

All these measures represent a step forward. But it is doubtful whether similar measures can be taken all over the nation for the Lower House election that must be held by autumn. There has been no effective attempt to help patients recovering at home to vote.

In March, the prefectural election administration commissions of seven prefectures where polls were scheduled to be held shortly, including Shizuoka, Tokyo, Hyogo and Fukuoka, submitted a petition to the internal affairs ministry, calling for steps to deal with the lack of a system that allows COVID-19 patients staying at home to vote without going out.

They urged the ministry to reform the electoral system, if necessary.

If there are no effective options to tackle the problem without legislation, the government should consider revising the Public Offices Election Law.

One potentially effective option proposed by local government officials is expansion of voting by mail.

After the end of World War II, mail-in ballots were widely permitted in Japan for voters who had difficulty in going to a voting location for health or other reasons.

After a rash of election fraud abusing this system during the 1951 unified local elections, including ballots filled out by other persons without the consent of the voters, the system was abolished in the following year. But the system was revived in 1974 for strictly limited use.

Currently, voting by mail is permitted only for severely disabled voters and those who have been officially recognized to need the highest “Level 5” nursing care.

Serious consideration should be given to the proposal to expand the scope of voters eligible for this program to include COVID-19 patients recovering at home or a hotel while taking all measures possible to prevent voting fraud.

The Diet has one month to consider the measure until the end of the current regular session. The ruling and opposition parties should take the initiative in tackling this problem instead of leaving the task entirely to the government.