VOX POPULI: The grim status quo in Gaza is life in the ‘world’s largest prison’ 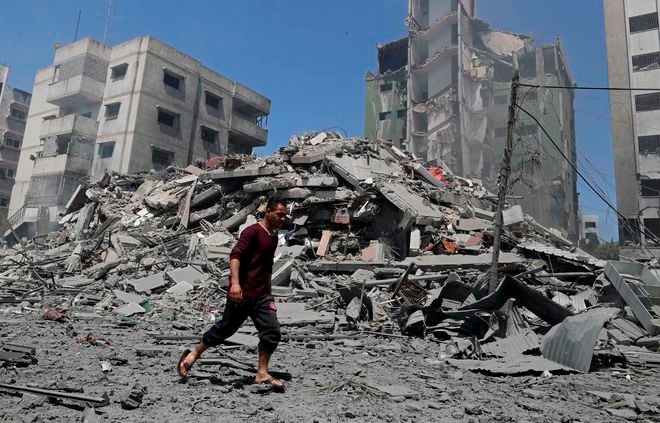 A man walks past the rubble of the Yazegi residential building that was destroyed by an Israeli airstrike in Gaza City on May 16. (AP Photo)

"Gaza no Biyoshitsu" (Beauty parlor in Gaza) is the Japanese title of the 2015 Palestinian drama film "Degrade."

Set in the Palestinian autonomous territory of Gaza, the film depicts a day at the beauty parlor. Women chat among themselves as they wait their turn to get their hair done. One patron tells her hairdresser about a book she read recently.

Words such as "war" and "enemy" pop up in their conversations.

"The next war is going to be worse," one customer notes. "(The Israelis) mean to erase Gaza from the map."

"Is there still anything else left to erase?" someone asks.

"Us," responds another. "We might be better off that way."

The film teaches us what it is like to live in danger every day.

Smaller than the Japanese island of Tanegashima, the Gaza Strip is home to 2 million Palestinians, rendering it one of the most densely populated areas in the world.

It is dubbed as the "world's largest open-air prison."

Bombarded repeatedly by Israeli forces over the years, the Gaza Strip is currently undergoing another wave of air raids.

Flames are rising from between buildings. Tall buildings are collapsing in heaps.

Israel claims only Hamas bases are being targeted, but many Palestinian civilians have been killed, including children.

The Israelis also justify their air attacks as retaliation against rockets launched by Hamas that have killed Israeli citizens.

Why, then, did Hamas attack Israel?

It was triggered by the expulsion of Palestinians from Jerusalem.

But going further back in history, it started with the creation of the State of Israel in May 1948 that displaced Palestinians from their ancestral homeland.

The region's complex history renders it extremely difficult to bring peace to the land.

But a cease-fire is the first thing that must be realized.

The United States and the Arab nations striving to intervene have heavy responsibilities to fulfill. They must never force Palestinians to keep living in an open-air hell.