Japanese puzzled when $1,400 U.S. stimulus checks arrive in the mail 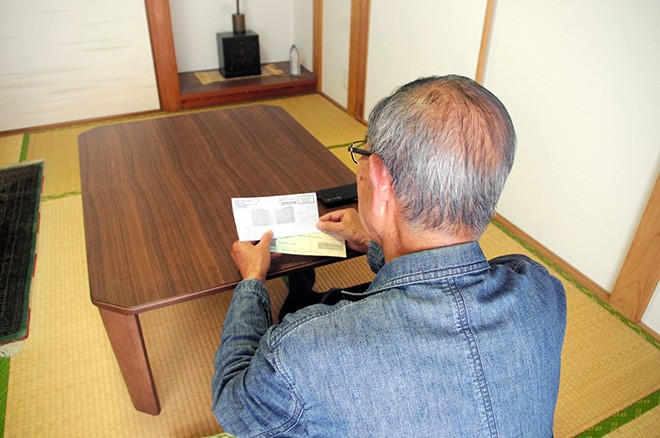 A man stares at a $1,400 stimulus check sent from the U.S. Department of the Treasury in Kamakura, Kanagawa Prefecture, on May 14. (Makoto Tsuchiya)

A 79-year-old man in Kamakura, Kanagawa Prefecture, received an official-looking piece of mail printed in English in late April.

His wife also received a check for the same amount.

They are among the Japanese recipients of U.S. stimulus checks to boost the economy during the pandemic, who are at a loss of what to do with the surprise payments.

According to a person who is related to a major bank, the bank’s call center has been inundated with inquiries about U.S. stimulus checks since May 11.

“As far as the bank is concerned, if a person wants to cash a check and the person’s identity is verified, we have to ask the U.S. side to pay,” the person said. “We don’t have a way to examine if the person is eligible to receive the check.”

In the Kamakura man's case, he thought the checks were related to his U.S. Social Security benefits.

He used to work at a major Japanese electronics company and was stationed at its U.S.-based affiliate for about five years from 1978.

He paid Social Security taxes during the years. Based on the Japan-U.S. bilateral agreement, he and his wife receive a monthly Social Security payment of $500 from the U.S. government.

But the U.S. Treasury check did not come with an explanation.

The man asked a friend who used to be an expat in the United States, who told him that the check is part of the U.S. government’s novel coronavirus assistance and suggested that he could probably cash it.

The man entertained the idea of pocketing the $2,800 and said to himself, “The United States has so much money to spare that it gives out (the checks) to foreigners like me who lived there about 40 years ago.”

He called a bank in Japan, inquiring how to cash the checks.

But a bank staff told him that the checks were likely intended for U.S. citizens.

The man later sent an email written in Japanese to the U.S. Embassy in Japan, asking, “Can a Japanese citizen cash it, too?”

The embassy replied to him the following day in English, saying, “We are aware that this affects U.S. citizens in Japan, especially those who do not have a U.S. bank account.”

The email also said the matter is under the jurisdiction of the Internal Revenue Service and included a phone number to call the IRS.

The man, after all, decided to do nothing.

“Only because I don’t want to go through all the trouble to make an international phone call,” he said.

The man instead placed the two checks in a file in which he has stored retirement-related documents.

He said he remained in the dark.

“I don’t know what to do from this point forward,” said the man, staring at the checks.

Nowadays, banks in Japan are careful about taking a check that is issued overseas to prevent money laundering.

But in cases such as when a U.S. national living in Japan needs to deposit a check, some banks will accommodate their needs.

The Economic Impact Payments is part of the package, providing up to $1,400 for eligible U.S. citizens and residents with some restrictions such as income amount.

According to data collected by the U.S. government, about 70,000 people living in Japan as of 2019 received Social Security benefits based on the Japan-U.S. bilateral agreement enacted in October 2005, known as the totalization agreement.

The number is relatively high among other advanced countries.

Donna Kepley, president of Arctic International LLC, an international tax consulting firm, said she thinks that the IRS made a mistake “connecting the stimulus payments to people who are getting the totalization agreement payment” and “the computer programmers who had to write the program to indicate which people should get a check probably did not make it as restrictive as they should have.”

Quite a few ineligible recipients including deceased people received a stimulus check issued under the Trump administration likely due to mistakes on application forms, as reported in the media.

Kepley said the Biden administration has prioritized the speed of providing checks to those in need.

“From a programming standpoint, it’s probably better to get the checks in the hands of hundreds of millions of people and then maybe 5,000 have to return them," Kepley said. "That seems to be the logic at the IRS. Because if they waited and made it more restrictive, the people who are supposed to get it might not get it, and also it would take much longer.”

In response to an inquiry from The Asahi Shimbun, the IRS said, "A nonresident alien in 2021 isn't eligible for the payment." The IRS said those who have received a check should write “VOID” on its back and mail it back to the IRS center in Texas.

Kepley said it is illegal for Japanese citizens who live in Japan and are not green card holders to cash the checks. She warned that if they don't return the payment, they could get a warning letter from the IRS in 2022.

“So, the way it works in the United States is that if you get a payment that is incorrect and you keep it, then when you get caught, when the IRS contacts you, you have to pay the money back plus a penalty plus interest on the money because you’ve had it to use,” Kepley said.

She continued, “It is very important that if the people are not green card holders, if they are actually a nonresident alien, they return the money as soon as possible.”

Otherwise, they may see a reduction in their future Social Security payments, she said.

Shunji Ichikawa, who runs a consulting center for people who travel between Japan and abroad, said that many of the recipients who received a stimulus check are not eligible to cash it.

“It seems startling in the Japanese sense, but there is a cultural difference that makes relief a top priority and handles negative effects as they arise,” Ichikawa said.

(This article was written by Makoto Tsuchiya and Erika Toh in Tokyo and Naoatsu Aoyama in Washington.)