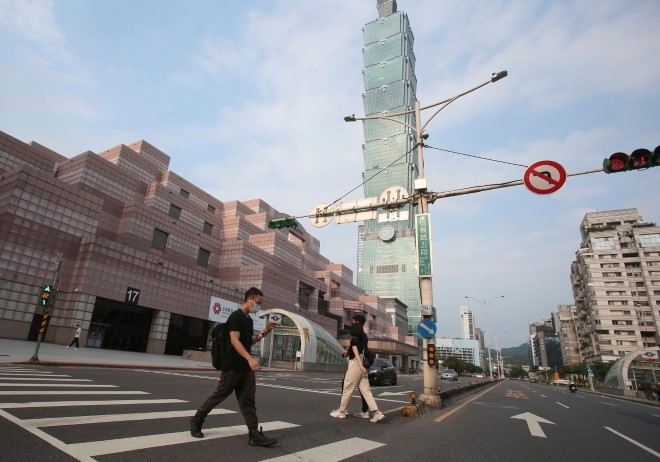 People wear face masks to protect against the spread of the coronavirus and walk past Taipei 101 building after the COVID-19 alert was raised to level 3 in Taipei, Taiwan, on May 15. (AP Photo)

TAIPEI--Much-needed COVID-19 vaccines should be coming to Taiwan soon, the GAVI Vaccine Alliance said on Monday, as the chip-producing island’s limited supplies run short during a spike in cases that has left the government scrambling for supplies.

A surge of coronavirus infections in Taiwan, one of the world’s COVID-19 mitigation success stories, has led to its stock of 300,000 doses rapidly running out, with only about 1 percent of its 23 million people vaccinated.

Taiwan has been a model of how to control the pandemic but over the past week has reported more than 700 domestic cases, out of a total of 2,017 infections recorded in all, triggering panic buying at supermarkets as the government tightened curbs.

The GAVI Vaccine Alliance, which with the World Health Organization is jointly running the COVAX scheme to provide doses to countries that may have difficulties obtaining them, said more AstraZeneca vaccines were coming to Taiwan.

COVAX expects Taiwan should receive allocated doses by the end of June at the latest, the alliance said in a statement to Reuters.

“The target remains to have 76 million doses of the COVID-19 vaccine from AZ delivered between February and June to supply up to 80 countries and we expect next tranches of deliveries of vaccines to Taiwan soon,” it said.

Taiwan has said it expects to get more than 1 million AstraZeneca shots via COVAX.

U.S. President Joe Biden announced on Monday he will send at least 20 million COVID-19 vaccine doses to other countries by the end of June, marking the first time the United States is sharing vaccines authorized for domestic use.

Biden announced he will send doses of the Pfizer Inc. PFE.N/BioNTech SE, Moderna and Johnson & Johnson vaccines, on top of 60 million AstraZeneca doses he had already planned to give to other countries.

The White House has not said which countries will receive the shots and the U.S. State Department did not respond when asked what specific assistance was being offered to Taiwan, which counts Washington as its most important security ally.

Taiwan only has AstraZeneca vaccines and last week health authorities stopped giving shots to people who are not on priority lists that include the elderly and medical staff.

AstraZeneca said that through the COVAX facility it was committed to broad and equitable access to the vaccine, including to supply Taiwan.

Moderna did not immediately respond to requests for comment.

Taiwan Health Minister Chen Shih-chung told reporters there was “no new progress” to report on the arrival of more vaccines but that lots more would gradually be coming. He gave no details.

The opposition Kuomintang party has called for the world to ensure that the island, a major semiconductor maker, gets priority help.

A further concern for the government has been China, which claims Taiwan as its own territory and has a deep antipathy towards its democratically elected leaders.

China has been shipping its domestically developed vaccines around the world and has offered them to Taiwan via COVAX, but Taiwanese law does not permit the use of Chinese vaccines.

A security official watching Chinese activity in Taiwan told Reuters the Taipei government believed Beijing was engaged in “cognitive warfare” to “create chaos” and undermine public trust in how the pandemic is being handled.

“They are trying to highlight the efficacy of the Chinese vaccines and how the government is blindly pinning its hopes on vaccines from the United States and home-made vaccines.”