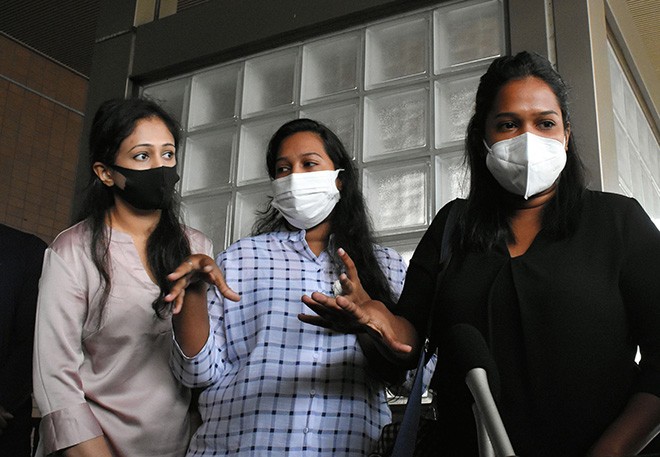 Wishma Sandamali’s sisters Wayomi, right, and Poornima, second from right, on May 17 speak about a cell at an immigration facility in Nagoya where Wishma had been detained. (Haruka Ono)

NAGOYA--Two sisters of a Sri Lankan woman who died while detained at an immigration facility here said their distrust of the facility's operator had grown after it offered them little explanation of the circumstances surrounding her death.

On May 17, the day after attending Wishma Sandamali's funeral, her sisters Wayomi and Poornima met with Taketoshi Sano, chief of the detention facility operated by the Nagoya Regional Immigration Services Bureau, and saw the cell where she had been detained.

Wishma, 33, died at the facility in March after suffering from severe nausea and having difficulty walking. She was detained in August 2020 after overstaying her visa.

“I became sad when I thought about the days my sister had to spend in such a tiny room,” Wayomi, 28, told reporters.

“I felt like the bureau is hiding something because it didn’t properly answer our questions,” said Poornima, 26.

They asked the bureau to explain why the investigation into their sister's death has progressed so slowly as more than two months have passed since then, according to Shoichi Ibusuki, a lawyer for the family.

“Are you reluctant to sincerely respond to the matter because Sri Lanka is a poor country?” the sisters were quoted as asking the bureau. “Can you stand it if the same thing happens to Japanese visiting Sri Lanka?”

Sano only replied that the bureau could not answer any questions as it is being investigated over the matter, Ibusuki said.

The Diet is discussing revisions to the immigration control law as the issue of prolonged detentions of foreign nationals who have overstayed their visas or who had their refugee claims denied has become a growing concern.

Wishma's death, however, has sparked mistrust in immigration authorities among opposition lawmakers, who are demanding the truth regarding her treatment and death at the facility and criticizing the bill, which they say gives more power to the authorities.

Mizuho Fukushima, head of the opposition Social Democratic Party, who visited the detention facility with the bereaved family, slammed the bureau for refusing to let her see the cell where Wishma had been held and a medical office, for “security reasons.”

Fukushima said the bureau’s response raised her suspicions that it was trying to conceal something.