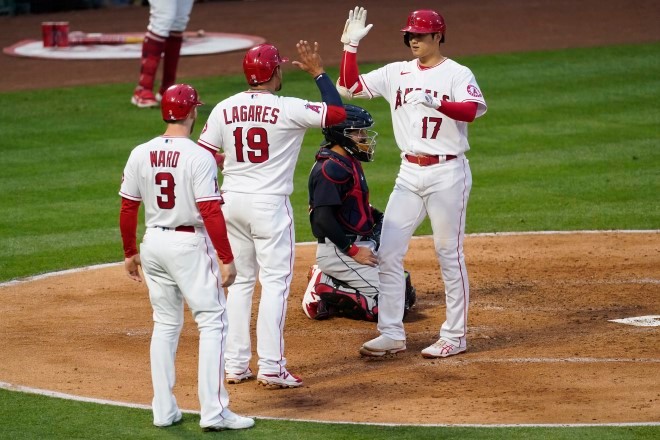 Los Angeles Angels designated hitter Shohei Ohtani (17) celebrates with Taylor Ward (3) and Juan Lagares (19) after hitting a home run during the second inning of a baseball game against the Cleveland Indians on May 17. (AP Photo)

The homer was Ohtani’s major-league-leading 13th of the season. He hit a ninth-inning game-winner Sunday in Boston.

Los Angeles won its second game in a row while Cleveland dropped its fourth straight.

Not everything went right for the Angels, though. Center fielder Mike Trout was removed after the first inning with what was diagnosed as a strained right calf muscle. Trout had walked and gone to second on a wild pitch, but he gingerly jogged toward third as Jared Walsh popped out to end the inning.

Trout will be re-evaluated Tuesday.

Angels left-hander Patrick Sandoval made his first start of the season, and his first pitch of the game was hit over the fence in left field for a homer by Cesar Hernandez.

Sandoval managed to settle in and last four-plus innings, giving up two runs and six hits. He walked one and struck out two. Sandoval gave up consecutive singles to start the fifth inning, but reliever Tony Watson (2-1) came in and stranded the baserunners, striking out the next three batters.

The Angels’ decisive second inning started with a leadoff double by Phil Gosselin off Indians starter Sam Hentges (1-1). Gosselin went to third on a single by Jose Iglesias, and both scored on a double by Juan Lagares.

One out later, Taylor Ward walked, and Ohtani followed with a 431-foot home run on a 1-2 pitch from Hentges.

Down 6-1, the Indians crept back into the game on an RBI single by Jose Ramirez in the third inning and a solo homer by Franmil Reyes in the sixth, making it 6-3.

Walsh had an RBI double in the seventh for the Angels, and Harold Ramirez homered in the eighth for Cleveland.

Angels closer Raisel Iglesias struck out the side in the ninth inning for his seventh save.

Hentges yielded six runs on five hits and three walks with one strikeout in 1 2/3 innings.