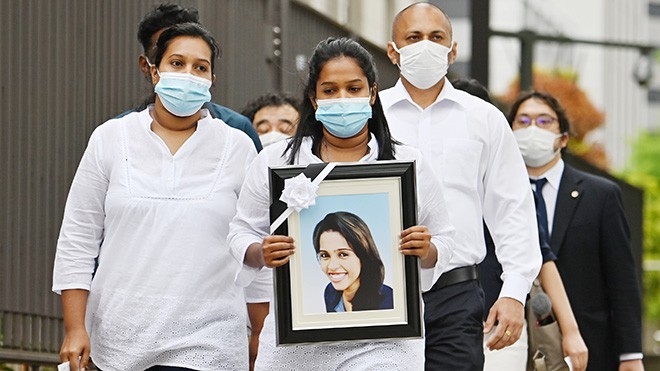 Wishma Sandamali’s bereaved family, seen on their way to sit in on a Lower House plenary session on May 18 (Yosuke Fukudome)

The ruling coalition decided on May 18 to forgo holding a vote on a controversial immigration bill that would revise the rules surrounding detaining and deporting foreign nationals, effectively scrapping the bill.

It comes amid strong opposition to the bill in the Diet and with the death of a detained Sri Lankan woman in the national spotlight.

The bill will be abandoned because of a Lower House election that needs to be held before the fall, officials said.

Secretaries-general and Diet affairs committee chiefs of the ruling Liberal Democratic Party and its junior coalition partner, Komeito, met on the same day and agreed to no longer proceed with discussion on the bill.

The LDP then informed the opposition Constitutional Democratic Party of Japan of the decision at a meeting of their secretaries-general.

The proposed legislation drew sharp criticism from opposition lawmakers over how immigration officials handled the death of a 33-year-old Sri Lankan, Wishma Sandamali. She died in detention at an immigration facility operated by the Nagoya Immigration Services Bureau in March.

The LDP and CDP began discussing the bill on May 14, but its prospects quickly began to deteriorate.

The opposition parties demanded the government release videos of Sandamali at the facility, but the LDP refused.

Three opposition parties, including the CDP and the Japanese Communist Party, refused to take a vote on the bill, and submitted a censure motion against Hiroyuki Yoshiie, a Lower House member who heads the Legal Affairs Committee, on May 14.

Some members of the ruling coalition became concerned about holding a vote on the bill while the public was growing increasingly critical of the Suga administration’s handling of the COVID-19 pandemic.

Under the government-drafted bill, a person could only apply for refugee status twice using the same reason.

A person found to have obstructed their deportation would face an expulsion order and criminal punishment under the bill’s revisions.

The bill would have introduced a new supervisory measure, under which a person can live outside a detention facility under the purview of a supervisor designated by immigration authorities.

The bill was intended to resolve the prolonged detentions of people who receive deportation orders but refuse to leave Japan.