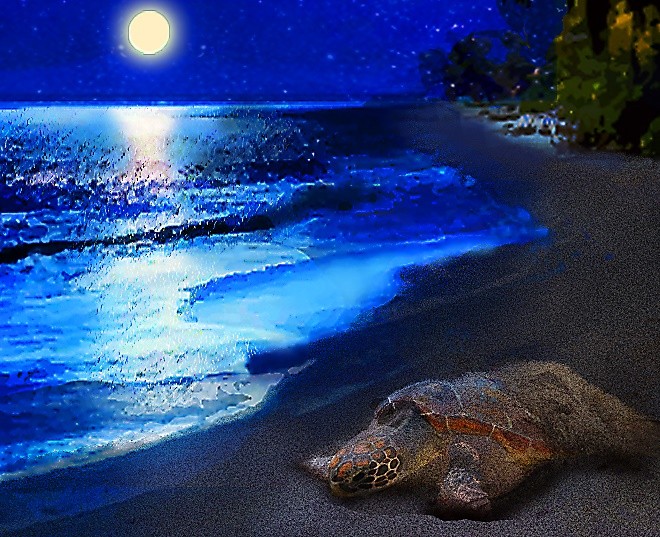 spring rapture
between your eyes and mine--
the sea is calm
--Suraj Nanu (Kerala, India)

lighting up the books
I read at night
fireflies in a bottle
--Chen Xiaoou (Kunming, China)

The 11-year-old haikuist at Sollars Elementary sketched a peaceful scene of sea turtles returning on the tide to lay eggs on the beach where they were born. His classmate, Aaron Royston, discovered a remarkable stone.

Small ravine
the wavy hair
of a stone goddess

Arvinder Kaur alluded to the words of Peggy Willis Lyles (1939-2010), which appeared in a 1980 issue of “Cicada” in Canada: summer night we turn out all the lights to hear the rain.

quarantine
what it means
to hear the rain

Noisy Brood X periodical cicadas that remained underground for 17 years are emerging by the trillions now that ground temperatures are soaring over 17 degrees Celsius in North America. Haikuists have to clamor quickly to mark this generation in 17 syllables. Soil warms earlier because of climate change. Before 1950, cicadas used to emerge at the end of May; now they’re already singing. Matsuo Basho (1644-1694) experienced both rain and insect songs in Yamagata Prefecture.

Gathering the rains of May
how swiftly it flows
Mogami River

the cicada’s cry
penetrates through the boulder
eternal stillness

This poem came to mind in Ian Willey’s last class of the day. At the time he said, tongue in cheek, “May Syndrome (Gogatsu-byou) is prevalent here in Kagawa. I hear there is no vaccination.”

lunar eclipse
how to kiss the lips
behind the mask

Just like hungry wolves
We howl, lonesome, at the moon
Hoping someone hears

Here and there
World in bated breath
Moon rising

eclipse eclipsed
all the monks
in welding masks

Robin Rich peered through a spyglass: lunar eclipse the pirate slowly blinks. Neena Singh admired moon-like beauty in Chandigarh, India. Marie Derley wondered where her extended family wandered. Not everyone will get to see it this time round, laments Germina Melius in Castries, Saint Lucia.

lunar eclipse
the bride’s face
under the veil

Poets refer to the celestial event as a flowering super-moon shadow. Teiichi Suzuki in Osaka, and Murasaki Sagano in Tokyo, respectively, noted how flowers are sensitive to the start of a lunar eclipse--especially its dramatic sudden blackout.

Rosemarie Schuldes called it a corona moon, while rocking back and forth to the sounds of Johannes Brahms’ famous classical piece, “Wiegenlied” in Mattsee, Austria.

corona moon
humming to herself
an old lullaby

Mind at ease in Parma, Italy, Mario Massimo Zontini equated the celestial satellite to the flourish of an inkbrush creating an elegant circle. Vladislav Hristov revealed his openness in Plovdiv, Bulgaria.

the night walk--
the spring full moon is
a bright enso

lunar eclipse
the open ends
of my enso

Yuji Hayashi’s sound sleep in Fukuoka was punctuated by periods of snoring. John Hamley took his eyes off the keyboard. Rich spotted a lunar moth. Satoru Kanematsu watched his step in a Nagoya park.

Hazy moon
butterflies all down
in the grass

Out for a morning walk, Hamley spotted flowering bloodroot. Native American artists use its reddish sap as a natural dye. The white-petaled herb is called a snow-poppy in East Asia. In San Diego, Marcie Wessels prayed that blood keeps smoothly flowing in the veins of the vaccinated.

new war moon
a clot
in the coursing stream

Haruka Takimoto studies haiku at Hokusei Gakuen University in Sapporo, where long-clawed bears and pond turtles have reappeared. Goran Gatalica roared in Zagreb, Croatia. Jacob Blumner in Flint, Michigan, and Isabella Kramer in Nienhagen, Germany, respectively, observed the return of carnivores at the top of the food chain.

February wind--
the roaring waves
in my veins

above the bird feeder
a Cooper’s hawk
casts its shadow

The waxing moon causes high tides to rise higher . Stephen J. DeGuire admired how small, slender fish swarmed onto beaches in California last night to spawn and bury their eggs in the sand. His haiku is about the hatchlings that will be swept out to sea on the next spring tide. Richa Sharma lives near Sanjay Lake in Ghaziabad, India.

highs and lows
of springtide during
grunion runs

springtide
a boulder and i share
the same blues

six feet
between you and me
miles of night

A smooth journey and
A sudden turn--
A different journey

Alan Peat had a blue-sky day moon in mind when he penned this haiku in Biddulph, England.

JL Huffman discovered gold in the Blue Ridge Mountains of North Carolina, explaining “nature teases, tricks and sometimes treats us.” Subir Ningthouja was inspired by a river-song in Imphal, India. Hifsa Ashraf contemplated the renunciation of worldly things and purification of the soul.

Waterfall...
a mountain sings
for the sea

Sufi meditation--
from the rock crevice
a cascading waterfall

Return to http://www.asahi.com/ajw/special/haiku/. The next issues of the Asahi Haikuist Network appear June 4 and 18. Readers are invited to send haiku about cicadas or rainbows on a postcard to David McMurray at the International University of Kagoshima, Sakanoue 8-34-1, Kagoshima, 891-0197, Japan, or e-mail to mcmurray@fka.att.ne.jp.