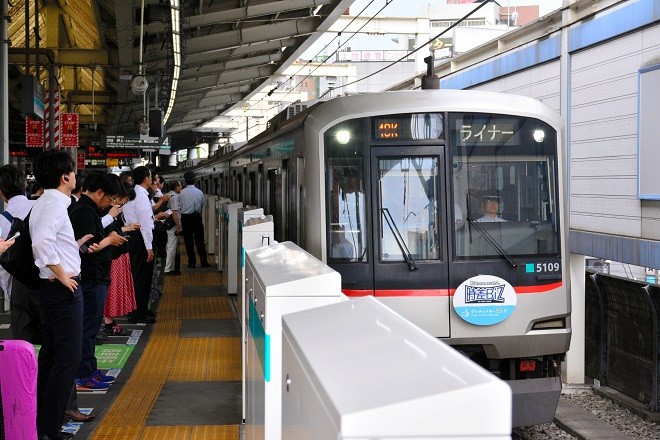 Tokyu Corp. operates train lines, including one that links Tokyo’s Shibuya district with the capital’s suburbs. (Provided by Tokyu Corp.)

Even before the onset of the novel coronavirus pandemic, major railway operator Tokyu Corp. had a sense of alarm about its core businesses going off the rails.

Tokyu, an industry leader that serves southwestern parts of the greater Tokyo area, has been hurt by the spread of teleworking under the COVID-19 pandemic.

The growth in working from home is negatively impacting the traditional business model of private rail operators, such as Tokyu.

The model consists of carrying passengers commuting to workplaces or schools and operating commercial facilities and hotels in their service areas, most typically at their terminal stations.

Tokyu is looking, ahead of its foundation centenary in autumn next year, for new revenue sources.

The company has plans for setting up more teleworking offices in Tokyo’s suburbs. It is also evolving the functions of its commuter passes.

Tokyu started “TuyTuy,” a fixed-price subscription system offering various services to holders of the company’s commuter pass of the IC card type, on a trial basis on May 12.

TuyTuy’s benefits include the possibility freely to rent a power-assisted bicycle and a mobile battery, receive regular bread deliveries from bakeries around Japan and get a flower from a florist up to six times a month.

These and other novel attempts, however, are not likely to generate big immediate earnings, so the Tokyu Group plans to cut down on its total capital investment in the year ending in March 2022 to about 60 percent of previous levels.

The company also has plans for cutting costs over a longer term, including expanding single-person train operations without a conductor.

The company released a document titled “Long-Term Management Initiative” in autumn 2019, which contained a projection saying the population in Tokyu’s service areas would peak and begin to drop in 2035.

In the document, President Kazuo Takahashi cited a speed-up of digitization and other trends and pointed out that “business models that are believed to be robust are likely to collapse within a short period of time.”

The company was thus reviewing its business operations when the pandemic broke out as its impact exceeded all anticipations.

Tokyu is therefore working harder than ever before on efforts to develop urban communities that people would want to continue living in even when they no longer have to commute every day from there to central Tokyo.

The effort comes as Tokyu is preparing to celebrate the 100th anniversary of its founding in September next year.

“We will be working ever more firmly on urban development projects over the next 100 years,” said Setsu Hamana, a managing executive officer.

“The pandemic took a major toll on us,” said Hirohisa Fujiwara, another managing executive officer.

Tokyu had last posted a full-year net loss in the fiscal year ending in March 2004.

Its earnings were hit hard by the trend for self-isolation, as many of Tokyu’s business arms, including those other than railroad operations, are premised on people’s mobility.

The number of rail passengers with commuter passes in the year ending in March 2021 was down more than 30 percent year on year. The margin of decrease was one of the largest among private railroad operators serving the greater Tokyo area, Tokyu officials said.

That is partly because many residents of Tokyu’s service areas work for large companies, which found it easier to introduce teleworking, and partly also because information technology companies are concentrated in Tokyo’s Shibuya district, the seat of Tokyu’s major terminal, the officials added.

The very advantage of living along a railroad line could dwindle in the future if telecommuting were to remain a norm after the pandemic is over.

BUSINESS MODEL DATES BACK A CENTURY

Tokyu has its roots in Den-en-toshi Co., a housing land development agency founded at the initiative of Eiichi Shibusawa (1840-1931), a famed industrialist. Meguro-Kamata Electric Railway Co., the company’s direct predecessor, was founded in 1922 to lay railroad lines that would serve the development areas.

Keita Goto (1882-1959), the official founder of the Tokyu Group, acquired a number of rival companies, including the predecessors of today’s Keikyu Corp. and Keio Corp., both of which remained part of Tokyu for some time.

The rail operator currently has about 230 group companies across a broad gamut of industrial sectors, including Tokyu Hands Inc., operator of a hardware and variety shop chain; Tokyu Resort Corp., a resort real estate agency; and Tokyu Construction Co., a general contractor.

The conventional business model went like this: lay out a rail network around a big city toward its suburbs, develop residential areas that offer easy access to the city center, and build department stores, supermarkets, hotels, cultural facilities and other establishments to add to the draw of the rail service areas, thereby attracting even more rail and bus passengers.

That business model, established by Goto, Ichizo Kobayashi (1873-1957) of today’s Hankyu Corp. and other trailblazers, has served as a paragon for many rail operators. The loss posted on the latest occasion by Tokyu, an industry leader, symbolizes the plight of the industry as a whole.