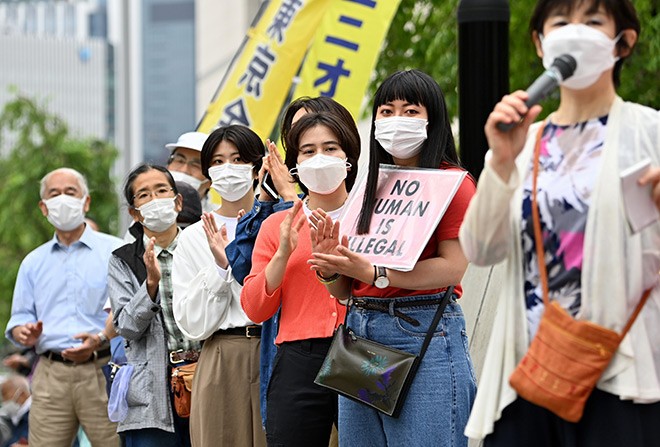 Opponents of the bill to revise the immigration control law gather in front of the Diet on May 18. (Yosuke Fukudome)

The ruling coalition decided on May 18 to abandon a bill to revise the immigration control law over fears that pursuing it would worsen the Suga Cabinet's plunging approval ratings and concerns about delays in Diet deliberations.

The opposition on two occasions rejected proposals from the ruling coalition to vote on the legislation in the Lower House Judicial Affairs Committee, mainly due to questions about why a 33-year-old Sri Lankan woman died while in detention at an immigration facility.

Considering the need for deliberation time in the Upper House, with the current Diet session scheduled to end on June 16, the ruling coalition’s only option was to force a vote on the proposal to revise the law in the Lower House committee.

But there were concerns that forcing a vote would further hurt the Suga Cabinet's approval rating, at 33 percent in the latest Asahi Shimbun poll, which recent public opinion surveys showed falling largely because of its handling of the novel coronavirus pandemic.

“If a vote had been forced, we would lose the Lower House election” to be held this autumn, a high-ranking official with the ruling Liberal Democratic Party said.

Meanwhile, officials of junior coalition partner, Komeito, had their own concerns about the possible fallout from a forced vote.

The party considers the Tokyo metropolitan assembly election on July 4 to be of equal importance to a national election. And because a Komeito member serves as chair of the Upper House Judicial Affairs Committee, party members lobbied Suga to not force a vote in the Lower House committee.

Suga himself admitted to close associates that he was wavering on a vote because he did not want to hurt the LDP’s ties with Komeito.

The opposition parties also upped the ante, with Jun Azumi, the chairman of the Diet Affairs Committee of the Constitutional Democratic Party of Japan (CDP), telling his LDP counterpart in a May 17 meeting that the opposition would not enter into Diet deliberations on other legislation if a vote was forced on the immigration control revision bill.

That threat led members of the LDP Upper House caucus to raise their own concerns about a forced vote in the Lower House. Those caucus members were worried that an opposition boycott of Diet deliberations would hinder passage of a bill to revise the national referendum law.

Passage would set in place the procedures to be followed for amending the pacifist Constitution.

The ruling coalition had already reached an agreement with the CDP to pass the bill in the current Diet session.

One LDP Upper House member appeared visibly relieved that the decision had been made to drop the immigration control revision because any controversy in the Diet over that legislation might have had adverse effects on the national referendum revision bill.

(This article was written by Natsuki Okamura and Yuichi Nobira.)