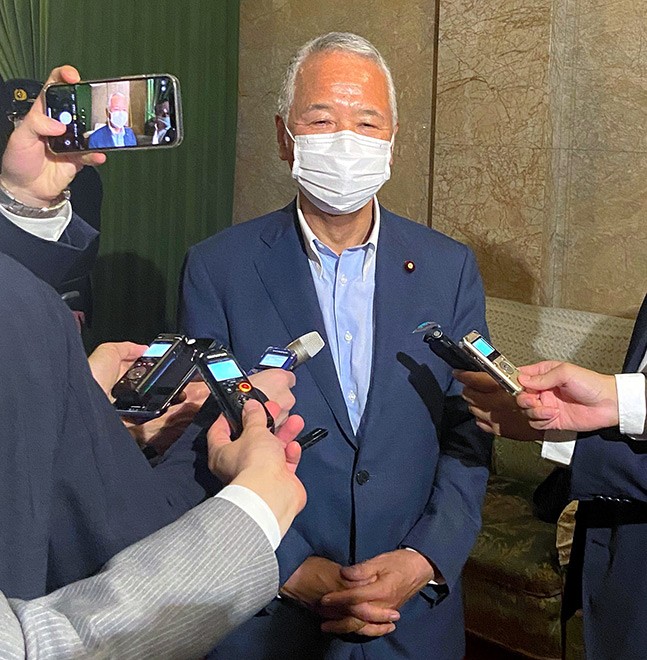 Senior members of the ruling Liberal Democratic Party engaged in finger-pointing and denials over an unanswered question in a vote-buying scandal that forced a political couple to leave both the party and the Diet.

Anri Kawai was found guilty of vote-buying through cash payments given to local politicians before she won an Upper House seat in the 2019 election. She resigned from the Diet in early February.

Her husband, Katsuyuki, a former justice minister and LDP lawmaker, pleaded guilty in late March to buying votes for her.

Questions have arisen on whether party leaders should be held accountable for the couple’s violations of the Public Offices Election Law.

Their answers have been a resounding “no” or “not me.”

LDP Secretary-General Toshihiro Nikai was asked about the money at a news conference on May 17.

“I was not involved in the disbursement of the money,” he stressed.

Motoo Hayashi, LDP deputy secretary-general and Nikai’s close aide, tried to shift the attention away from Nikai by saying, “The party’s election bureau chief at that time was in charge of Hiroshima.

That person was Akira Amari.

“I was not involved, not even a millimeter,” Amari told reporters on May 18, before offering a clarification.

“To be more accurate, I was not involved, not even a micrometer,” Amari, former state minister in charge of economic revitalization, said.

As for Nikai, the questions about the money continued on May 18.

He again denied his involvement during a news conference.

But reporters kept asking Nikai about the money, noting that he was the No. 2 official in the LDP at the time.

Hayashi then jumped in to provide cover.

“The secretary-general is speaking,” Hayashi snapped at reporters. “Do not be so intrusive and ask him about every detail of the inner workings of the party.”

Former Foreign Minister Fumio Kishida, who heads the LDP’s Hiroshima prefectural chapter, has urged Nikai to accept responsibility and offer a clear explanation of the money that went to Anri’s campaign.

“There is no way that the secretary-general was not involved,” a veteran LDP lawmaker said.

Another high-ranking party official said Nikai and others should remain low-key about the matter to prevent everybody from “searching for the culprit.”

(This article was written by Yuichi Nobira and Ayako Nakada.)