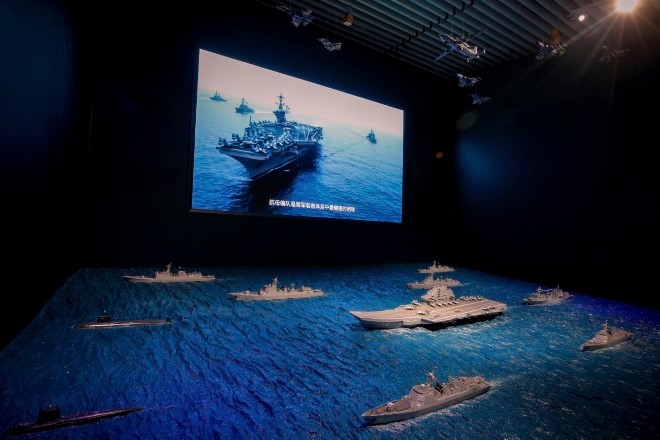 In this Aug. 1, 2019, file photo, a TV screen shows the U.S. Navy fleet sailing in formation near models of the Liaoning aircraft carrier with navy frigates and submarines on display at the military museum in Beijing. (AP Photo)

BEIJING--China on Wednesday protested the latest passage by a U.S. Navy ship through the Taiwan Strait, calling it a provocation that undermined peace and stability in the region.

The U.S. Navy’s 7th Fleet said that the guided missile destroyer USS Curtis Wilbur conducted a routine Taiwan Strait transit on Tuesday in accordance with international law. The passage “demonstrates the U.S. commitment to a free and open Indo-Pacific.

“The United States military will continue to fly, sail, and operate anywhere international law allows,” the Navy said in a statement.

While the strait is in international waters, China claims self-governing Taiwan as its own territory and regards the U.S. Navy’s presence in the area as a show of support for the island’s democratic government.

In a statement on the Defense Ministry website, spokesperson for the Eastern Theater Command Col. Zhang Chunhui said the U.S. actions were “sending wrong signals to the ‘Taiwan independence’ forces, deliberately disrupting and sabotaging the regional situation and endangering peace and stability across the Taiwan Strait.”

He said Chinese forces tracked and monitored the ship and “strictly guarded against all threats and provocations.”

China last month complained that activity by U.S. military ships and surveillance planes directed at it has increased significantly under President Joe Biden.

It was particularly disturbed by close-in observation of the Chinese aircraft carrier Liaoning and its battle group by a U.S. destroyer in the South China Sea, as advertised by a widely distributed photo of U.S. officers relaxing on deck with the Chinese flattop well within sight.

China accused the U.S. of having “seriously interfered with the Chinese side’s training activities and seriously threatened the safety of navigation and personnel on the both sides.”