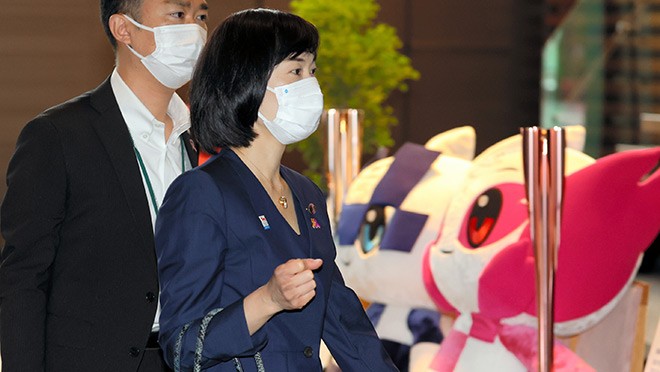 Tamayo Marukawa, the state minister in charge of the Tokyo Olympic and Paralympic Games, enters the prime minister’s office to attend a Cabinet meeting in Tokyo on May 18. (Koichi Ueda)

Staff who come into close contact with athletes at the Tokyo Olympics and Paralympics will need to undergo daily COVID-19 testing during this summer's sports extravaganza.

Tamayo Marukawa, the state minister in charge of the Tokyo Olympic and Paralympic Games, said at a news conference on May 18 after a Cabinet meeting that she would hammer out the details with the Olympic organizing committee.

Under the plan, Olympic staff who come within one meter of athletes for more than 15 minutes would have to be tested each day of the Summer Games.

All athletes are basically obligated to take daily COVID-19 tests.

Marukawa also said that medical personnel, interpreters, some volunteers including drivers who transport athletes, and some media members would also need to undergo daily testing.

She added that she would differentiate the frequency of tests specifically depending on the staffers' duties and activities.

“How about cooking staff or hairdressers?” Marukawa said. “Such workers would need to be tested daily. We are almost finished deciding rules on this matter.”