4 arrested over forged names on petition in Aichi recall bid 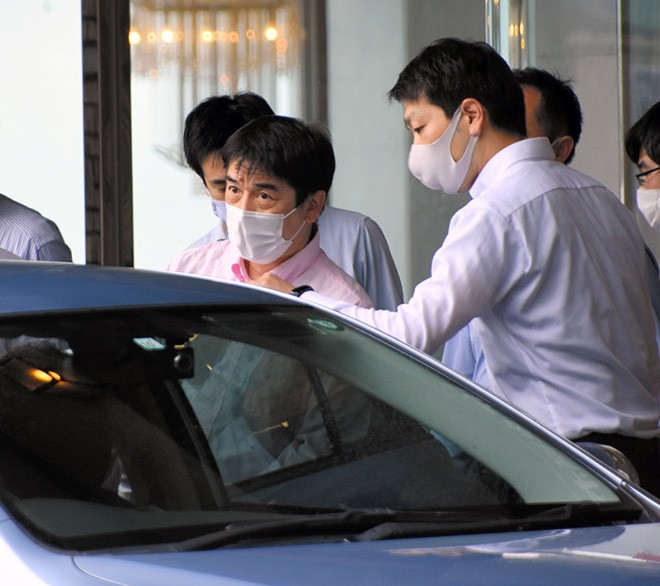 Police officers escort Takahiro Tanaka, center, after his arrest on May 19 on suspicion of forging signatures in a recall petition drive. (Hirohisa Yamashita)

Police arrested four people on May 19 in connection to a mass-forgery scandal stemming from a petition to recall Aichi Governor Hideaki Omura.

Aichi prefectural police arrested Takahiro Tanaka and three others on suspicion of violating the Local Autonomy Law by forging the names of residents in a campaign to oust the governor. The law forbids even signing petitions on behalf of family members who may be temporarily away.

Tanaka, 59, a former Aichi prefectural assembly member, headed the secretariat in charge of gathering the signatures for the recall. Police also arrested Tanaka’s wife, Naomi, 58, his second son, Masato, 28, and Michiyo Watanabe, 54, who worked in the secretariat.

According to Aichi prefectural police, the four are suspected of conspiring to fake signatures by hiring part-time workers to forge the names of Aichi voters.

Tanaka told The Asahi Shimbun before his arrest that he had been concerned about the slow pace at which signatures were being gathered. He said he asked a Nagoya advertising firm for help in collecting signatures.

The recall attempt began in August 2020 by Katsuya Takasu, a cosmetic surgeon well known for denying the Holocaust and the Nanking Massacre, and others upset at Omura’s handling of the Aichi Triennale 2019 international art festival.

Controversy surrounded the Aichi Triennale even before it opened on Aug. 1, 2019.

Its “After ‘Freedom of Expression?’” exhibit featured a sculpture meant to symbolize "comfort women," who were forced to provide sex to Japanese military personnel before and during World War II.

A video presentation on display showed scenes of burning portraits, including one of Emperor Showa, the posthumous name of Emperor Hirohito, who reigned from 1926 until 1989.

Protests and threats of terrorist acts led to the exhibit’s suspension after just three days.

Takasu set a goal of collecting 1 million signatures, but the campaign was only able to submit about 435,000.

In February, the Aichi prefectural election administration commission invalidated about 83 percent of the signed names because they were suspected forgeries. Aichi prefectural police began investigating that same month and seized all the documents containing the suspect signatures.

Omura told reporters on May 19 he wants the entire scheme to be unraveled because it was an “outrageous act that sought to destroy Japanese democracy.”

Omura accused Takasu and Nagoya Mayor Takashi Kawamura of masterminding the mass forgery, and said it is “incredibly disgraceful that they are trying to get away by placing all the responsibility on Tanaka.”

Kawamura and Takasu maintained that they are totally innocent when they spoke separately with reporters on May 19.

Kawamura said he was confident that the police investigation would show that he was not involved in any way. He added that he was never in a position of overseeing what Tanaka did.

Takasu has repeatedly denied any knowledge of the forgeries, but did say he was responsible for the recall campaign because he had headed the effort.