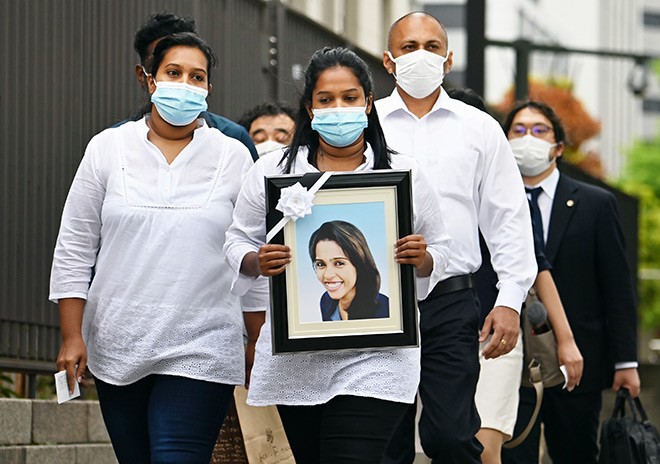 Wishma Sandamali’s bereaved family, seen on their way to sit in on a Lower House plenary session on May 18 (Yosuke Fukudome)

Sisters of Wishma Sandamali, a Sri Lankan woman who died while detained at an immigration facility in Nagoya, met the justice minister on May 18 and urged her to release the facility’s video footage of their sister.

Wayomi and Poornima are visiting Japan following the death of their sister Wishma in March.

Wishma, 33, died at a detention facility run by the Nagoya Regional Immigration Services Bureau after suffering from severe nausea and experiencing difficulty walking. She was detained in August after overstaying her visa.

Justice Minister Yoko Kamikawa held hands with Wayomi, 28, and Poornima, 26, and hugged them during their meeting on May 18, the sisters told reporters. They said Kamikawa also offered her heartfelt condolences.

When they urged Kamikawa to quickly release the video and the results of the investigation into their sister’s death, the minister told them that she will make sure that they can receive the final report on the case, the sisters said.

But they revealed that the immigration bureau rejected their request to release the footage when they met earlier.

Wayomi and Poornima said they cannot report how their sister died to their mother when they return to Sri Lanka without seeing the videos.

Before their meeting with Kamikawa, the two sat in on a Lower House plenary session held on the same day. They wanted to enter the chamber with a photo of Wishma, but their request was turned down due to opposition from the ruling party.

“I was sad because we couldn’t carry a picture of our sister,” said Poornima. “I want the Japanese government to make sure that no one will die like she did.”

The ruling coalition decided on May 18 it would not hold a vote over a controversial immigration reform bill that would have revised the rules for detaining and deporting foreign nationals, effectively shelving the legislation.

The proposed reforms had drawn sharp criticism from opposition lawmakers over how immigration officials handled Wishma’s death. Opposition parties refused to take a vote on the bill until the government releases the video of her at the detention facility.