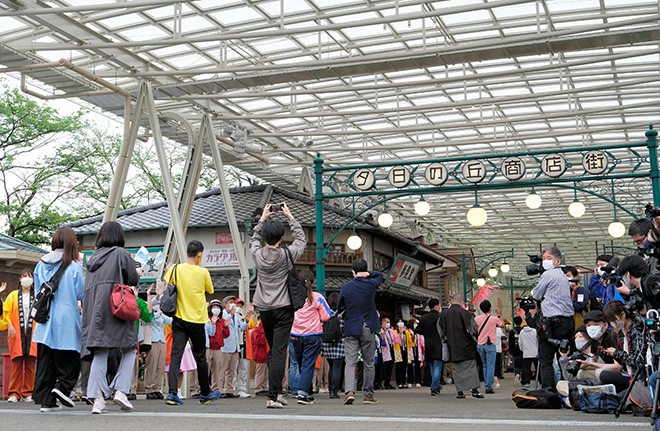 Visitors enter the renovated Seibu Amusement Park as it reopens in Tokorozawa, Saitama Prefecture, on May 19. (Wataru Sekita)

TOKOROZAWA, Saitama Prefecture--The Seibu Amusement Park reopened here on May 19 after a sweeping facelift to evoke nostalgic times with a bustling shopping street out of the 1960s and Godzilla brought to life off the silver screen.

However, there were still precautions against the novel coronavirus in place including temperature checks and sanitizing stations to jolt visitors back to the present.

Park-goers on opening day were welcomed by numerous shops flanking a street as well as a lively performance of a police officer apprehending a thief.

The "Godzilla the Ride" attraction allows visitors to board vehicles bearing a special armored car motif where they can watch a fierce battle between Godzilla and the three-headed King Ghidorah up close.

The attraction was designed by Takashi Yamazaki, known for the “Always--3-chome no Yuhi” (Always--Sunset on Third Street) series, and other creators.

Although concerns were voiced about the reopening of the park during the COVID-19 pandemic, operators stuck to their original schedule by putting in place an array of anti-virus measures.

The park opened in 1950. Visitor numbers have dwindled to below 500,000 annually in recent years largely due to its aging attractions. During its peak year of fiscal 1988, the park welcomed 1.94 million visitors.