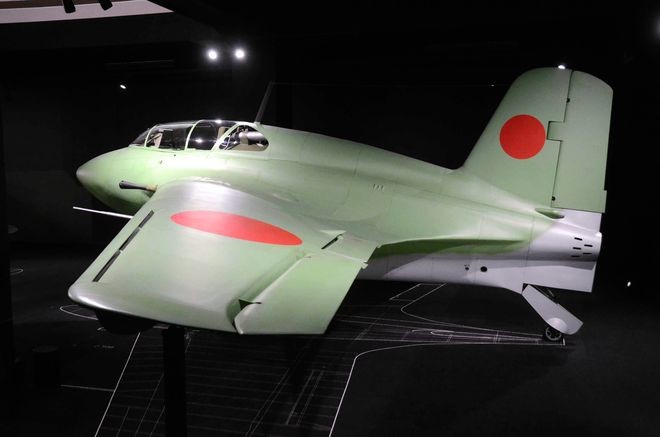 MATSUMOTO, Nagano Prefecture--The Shusui, a rocket-powered interceptor aircraft developed to help reverse Japan's waning fortunes late in World War II, is one of those projects about which little was known.

As almost all records of its development were destroyed in the aftermath of the conflict, historians had little to go on--until now.

However, rare images of the facility that worked to develop the plane closely modeled on the German Messerschmitt Me 163B Komet aircraft recently emerged.

Among other things, they depict the engine testing site run by the Imperial Japanese Army at what is now Matsusho High School here.

Nine photos show a building at the test ground, the fighter’s rocket engine and key personnel involved in the project.

One expert hailed the previously undisclosed materials as a “historic find.”

Work on the Shusui started in August 1944 based on designs from the German military. It was viewed as a means of slowing down strategic bombing runs by U.S. B-29 Superfortress aircraft.

The Navy and Army were responsible for the development of the body and the rocket engine, respectively.

The Shusui was supposed to reach an altitude of 10,000 meters in three and a half minutes at a maximum speed of 900 kph, and was deemed to be the final hand to be played by the Japanese military to defend the archipelago.

Mitsubishi Heavy Industries Ltd. in Nagoya was responsible for designing the prototype. Increasingly intensified air raids forced the company to relocate its rocket engine development team to the experimental facility in Matsumoto in March 1945.

The first trial flight took place in July 1945 but failed. In the end, the Shusui project never got off the ground.

The recently discovered photos were among items kept by Keisuke Hirata, an engineer with officer rank who was involved in the development. The images remained with his family in Yokosuka, Kanagawa Prefecture, after his death.

They show, for example, the interior of the roofed test site as well as more than 200 engineer-ranked officers, lower-ranked military personnel, mobilized students and female temporary staff members posing in front of the lecture hall that still exists at Matsusho High School.

Kazuya Shibata, 59, a Shusui researcher in Tokyo who examined the pictures, said the images had never been disclosed publicly. All the photos are dated immediately after Japan’s surrender.

One portraying 10 engineer officers holding sabers in their hands with the donjon of Matsumoto Castle in the background bears the date Sept. 4, 1945.

“The photo was snapped a little after the surrender on Aug. 15, and confirms disarmament had not been completed in Matsumoto at the time,” said Shibata.

“Only the accounts of those involved in the project had previously been available,” Shibata said. “As no other definitive materials connected to the Matsumoto test site were known to exist, the photo of 200 or more personnel of varying backgrounds is a surprising find.”

He continued, “If some of them are still alive or if their bereaved families have heard their stories about the experimental facility, I sincerely want to talk to them.”