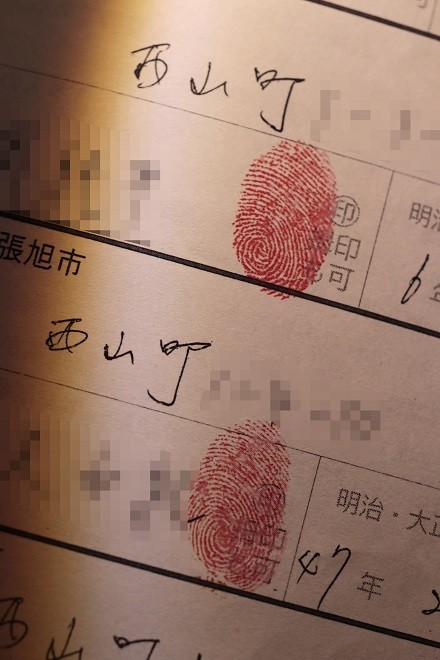 A list of signatures collected for a campaign to recall Aichi Governor Hideaki Omura shows almost identical handwriting and fingerprint seals. Part of the photo is modified to protect the privacy of individuals. (Asahi Shimbun file photo)

It shows a woman carrying an infant on her back as she signs her name on a signature form with a determined frown. Done in bold strokes in black and white, it is a powerful work.

I lingered before it when I saw it the other day at the Machida City Museum of Graphic Arts in western Tokyo. It conveyed the gravity of the act of signing one's name to a cause that really matters.

Completed in 1960, Suzuki apparently drew inspiration from a movement to protect workers' rights.

In what should probably go down in history as the worst insult ever done to any signed petition, four people were arrested on May 19 on suspicion of mass-signature fraud on a petition drive by a group to recall Aichi Governor Hideaki Omura.

Among them was Takahiro Tanaka, the head of the secretariat in charge of gathering the signatures, who allegedly hired part-time workers to copy the names of numerous Aichi voters onto the petition form.

Tanaka reportedly said he was becoming worried about not being able to collect enough signatures "as expected."

The fact that he had an expected number in mind doesn't feel quite right in itself. But be that as it may, he could have become desperate enough to think of forging signatures as just an exercise in using hand and arm muscles to write with a pen.

But one fact that must not be overlooked is that the sitting mayor of Nagoya was backing this recall petition.

Back in the 1950s, a petition to ban hydrogen bomb tests went down in Japan's postwar history when it collected more than 30 million signatures, paving the way for the establishment of the World Conference Against Atomic and Hydrogen Bombs.

A comment in support of the petition, submitted to a newspaper, pointed out that even a small voice can eventually grow big and "come back as an echo for certain."

But in Aichi, some individuals decided that if there were not enough small voices, they could be faked.

This mass-forgery scandal, which is going to leave a sordid mark in history, may be a manifestation of the erosion of democracy in Japan.