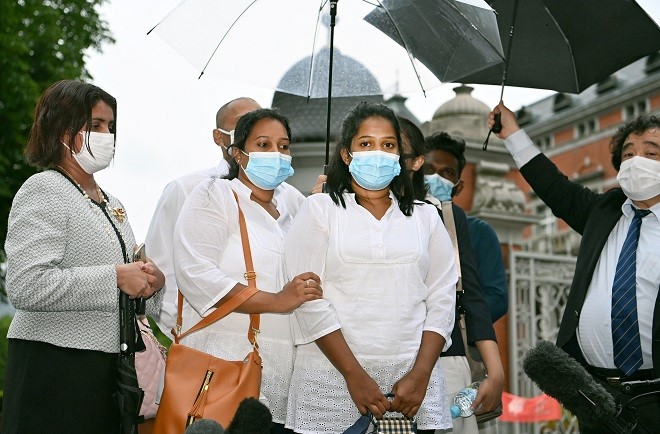 The government and the ruling coalition have abandoned plans to enact a bill to revise the Immigration Control and Refugee Recognition Law during the current regular Diet session.

Since a Lower House election is set to be held by autumn, the bill is most likely to be scrapped.

As the Cabinet's approval ratings have fallen sharply due mainly to the government’s mishandling of the COVID-19 crisis, the ruling camp has apparently flinched at suffering an additional blow with the public by trying to ram the much-criticized legislation through the Diet.

Diet deliberations on the bill have laid bare many serious problems with the proposed revision of the law, prompting even some ruling party lawmakers to openly call for redoing the bill.

Moreover, Justice Minister Yoko Kamikawa and the immigration control authority have come under fire over the March death of Wishma Sandamali, a 33-year-old Sri Lankan woman detained at a facility operated by the Nagoya Regional Immigration Services Bureau, and their responses to the tragedy. The ruling camp clearly had no choice but to give up on the bill.

The way the Sri Lankan immigration detainee was treated has underscored afresh the Japanese immigration control authority’s lack of sensitivity to human rights and international norms.

It was obvious that the strategy of waiting for the current storm to pass to resubmit the bill after minor changes was a political nonstarter.

This confusion should be used as an opportunity to reform the immigration control organization and the mindset of officials and, most importantly, to make a fundamental review of Japan’s basic policy and system for dealing with foreign nationals.

Since the Immigration Control and Refugee Recognition Law was established in 1951, few revisions have been made to its provisions concerning the detention and deportation of illegal immigrants.

The government’s attempt to narrow the gap between the law and the reality was a move in the right direction.

The problem is that the attempt was not firmly based on the principle that foreign nationals should be treated as the same human beings whose rights and dignity should be protected. Instead, the priority was placed on the logic and convenience of the authority.

Even foreign nationals who have established livelihoods in Japan, for instance, could become illegal immigrants if they lose their visa status for some reason. Many such cases, however, are better handled if the individuals involved are allowed to live with the help of their families or supporters instead of automatically being detained.

This view was behind a provision in the amendment bill to change the traditional policy of detaining all illegal immigrants, one of the positive elements included in the proposal.

But the proposed change was far from a real improvement as the decisions to detain specific illegal immigrants would be left up to the immigration control authority and not be subject to any review by an independent watchdog. That would not measure up to international standards among developed nations.

Much the same is true with the proposal to revise the current provision that foreign nationals cannot be deported while they are applying for refugee status to make it possible for them to be deported during their third application onward on the same grounds.

This is another sign that the authority only focuses on efficiency and effectiveness in dealing with issues concerning illegal immigrants.

A fundamental review of the whole system is easier said than done. But the government should take a first step by granting the request from the sisters of Sandamali, the Sri Lankan detainee who died in March, for the detention facility’s video recording showing how her health worsened during the detention.

The sisters, currently in Japan, met the justice minister on May 18 and urged her to release the video footage.

Kamikawa has rejected the opposition parties’ demand for the release of the video, citing “security reasons.” But the reason she has cited is totally unconvincing.

The reform of the immigration control system should be aimed at injecting more transparency into the treatment of detainees and requiring all the officials involved to recognize and act on their responsibility for the lives of detainees.

The government should start the mission by treating foreign nationals as individuals whose dignity should be respected.