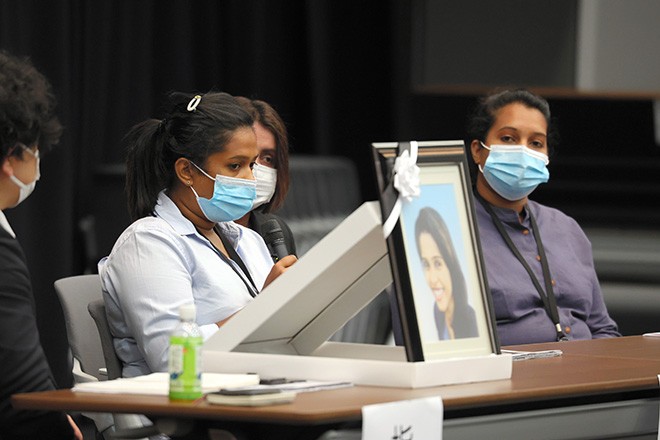 Wishma Sandamali’s sisters Wayomi, left, and Poornima meet with opposition lawmakers in the Diet on May 19. (Koichi Ueda)

The stubborn refusal of immigration officials to release video of a Sri Lankan woman who died while in detention is raising suspicions among her bereaved sisters and opposition lawmakers about a cover-up.

Wishma Sandamali’s sisters Wayomi and Poornima met with opposition lawmakers on May 19 to discuss the death of Wishma, 33. She died on March 6 while detained at a facility run by the Nagoya Regional Immigration Services Bureau.

“The immigration agency may be hiding something if it is unable to release the video,” one of the sisters said.

An opposition lawmaker on the Lower House Judicial Affairs Committee said the “Justice Ministry’s stubbornness leads me to think that something truly terrible is contained in the video.”

The bereaved family members and opposition lawmakers have long said that the video would go a long way in explaining how Wishma died.

But Justice Ministry officials have dug in their heels and leaned on two main reasons for refusing to release the video.

One is for security reasons. Citing the detention of criminals at the facilities, including terrorists, ministry officials said releasing the video would reveal the interior of the facilities, how frequently officers check in on detainees and what routes they take. They argue the information must be kept confidential to prevent detainees from escaping.

Opposition lawmakers responded by asking that the video be released in a closed-door session of the directors of the Lower House Judicial Affairs Committee. They cited past precedent of similar video being released in such a manner in the case of an inmate who died in a Nagoya prison.

Justice Minister Yoko Kamikawa has only said it is up to the committee directors to decide.

Immigration Services Agency officials have also argued that Wishma’s honor and privacy must be protected.

At the May 12 Lower House Judicial Affairs Committee session, Kamikawa said the video shows, in detail, “the process by which (Wishma) died, so there are problems from the standpoint of the honor and respect that must be paid an individual who has died.”

Opposition lawmakers responded by asking if privacy is a good reason for refusing to allow even her family members to see the video.

The two sisters met with Kamikawa on May 18 and asked that they be shown the video. But Immigration Services Agency officials turned down their request.

Agency officials doubled down and came up with a third reason for refusing to release the video on May 18.

Pointing to an ongoing third-party investigation into Wishma’s death, agency officials said releasing the video would make it difficult for panel members to conduct an unbiased investigation.