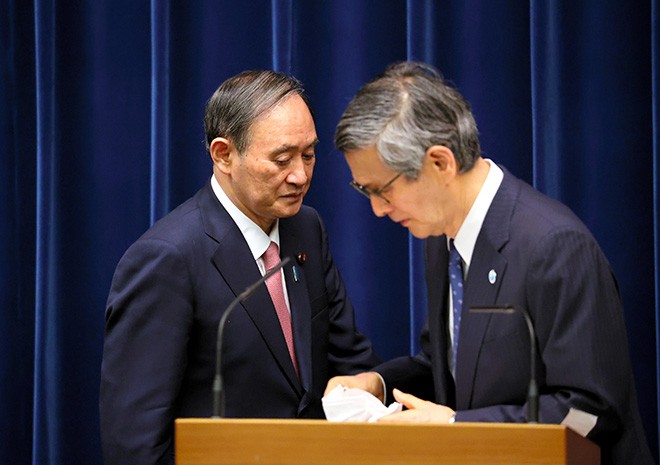 Shigeru Omi, right, head of a government task force to deal with the novel coronavirus, and Prime Minister Yoshihide Suga after a news conference on May 14 (Koichi Ueda)

New COVID-19 cases have decreased in some areas of Japan, but not enough to warrant a lifting of the state of emergency as scheduled on May 31, health experts have warned.

They said many affected places have yet to show they can emerge from the most serious stage of the health crisis.

“It is too early to judge now, but lifting the emergency may be difficult,” a member of a health ministry panel of experts on COVID-19 said a May 19 meeting.

Under one of the criteria set by a government task force, the state of emergency can be lifted only after the number of new COVID-19 cases drops below the most serious stage of a four-level classification. Stage 4 for this category is a situation in which there are 25 or more new infections per 100,000 people over a week.

Cabinet Secretariat data as of May 18 showed the figure for Hokkaido was 72 and 64 for Fukuoka Prefecture, while the numbers exceeded 50 in Aichi, Osaka, Okayama and Hiroshima prefectures.

In Tokyo, it was 38, about 40 percent of the peak in January, when the capital was struck by the third wave of infections.

Data compiled by The Asahi Shimbun showed that on March 1, when the second state of emergency was lifted for Osaka Prefecture, the prefecture’s number was 5.7.

On March 22, after Tokyo emerged from the second state of emergency, the figure for the capital was 15.3.

Health experts said the number of new cases has not declined substantially despite more stringent anti-coronavirus measures being taken under the state of emergency or for pre-emergency periods. They said more contagious variants have taken root and are causing numerous outbreaks.

Shigeru Omi, an infectious disease expert who heads the government task force, said the state of emergency should not be lifted when new case numbers are hovering at high levels.

“It is crucial to first make sure the infection trajectory is on stage 3 and steadily moving toward stage 2,” he said at a May 7 news conference.

Some experts said the bar should be set even higher for Tokyo to prevent a quick rebound in infections in the densely populated capital. They suggested that Tokyo’s daily count of new cases should be down to around 100 before the state of emergency is lifted.

With the exception of Tokyo, health care systems have been stretched in all prefectures under the state of emergency. Half or more of their hospital beds for COVID-19 patients are occupied, putting the prefectures at stage 4 in that category.

The situation is particularly dire in Fukuoka and Okayama prefectures, where more than 80 percent of the beds are filled.

Also disturbing is a surge in the number of COVID-19 patients in serious condition, with the national total hitting a record 1,293 on May 18.

The collective number of such cases for the Kansai prefectures of Osaka, Hyogo and Kyoto stood at 493, 39 fewer than from May 1.

But some experts suspect that figures for severely ill patients in some prefectures, including Osaka, may be underreported because of the lack of hospital beds secured for them.

As for Tokyo and the three neighboring prefectures of Saitama, Kanagawa and Chiba, serious COVID-19 cases rose by 52 to 216.

The remaining 40 prefectures in Japan accounted for 584 serious cases, 230 more than the number on May 1.

(This article was written by Hiroshi Ishizuka and Kayoko Geji.)