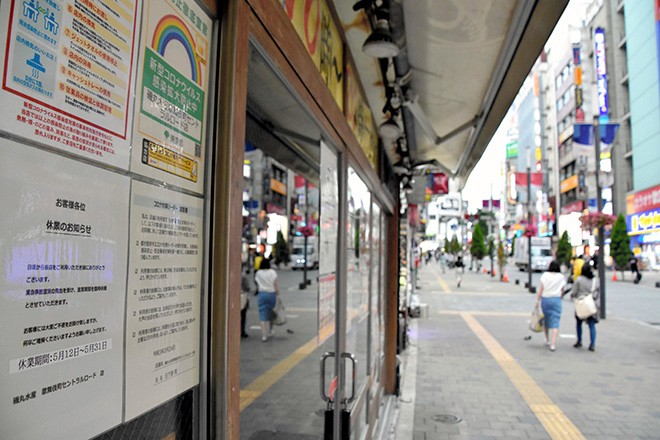 Many establishments in the Kabukicho entertainment district in Tokyo's Shinjuku district remain closed on May 18. (Hiroaki Takeda)

Local officials in Hokkaido confirmed 681 new COVID-19 cases on May 20, the second highest daily figure for the northernmost main island.

It marked the third consecutive day Hokkaido had more than 500 new cases. A record 712 cases were confirmed on May 13, three days before Hokkaido was placed under a state of emergency for the novel coronavirus pandemic.

While the state of emergency is scheduled to remain in place until May 31, the daily figures continue to remain at high levels.

Meanwhile, in the southernmost prefecture of Okinawa, prefectural officials said there were 198 new cases on May 20, a slight decline from the record 203 of the previous day.

Prefectural officials have asked the central government to declare a state of emergency for Okinawa. One reason is that for the most recent week there were 63.61 COVID-19 cases per 100,000 people in the prefecture, second only to Hokkaido.

New COVID-19 cases in Tokyo continued to decline on May 20 as metropolitan government officials confirmed 843 new cases in the capital, 167 fewer than the preceding Thursday.

For the week ending May 20, the daily average of new cases was 704, or 75.4 percent of the level of the previous week.

Metropolitan government officials said there were 69 patients with serious symptoms, a decline of four from the previous day.