Saleswoman, 89, accused of fraud to the tune of 180 million yen 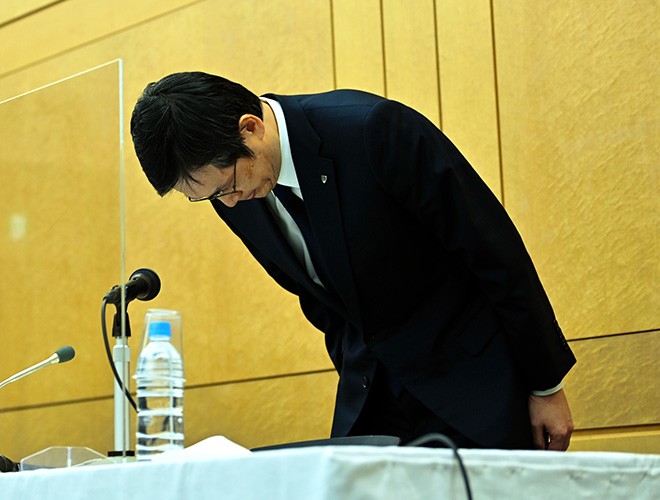 Seiji Inagaki, president of Dai-ichi Life Insurance Co., apologizes for a series of frauds involving its employees at a news conference in Tokyo on Dec. 22. (Asahi Shimbun file photo)

YAMAGUCHI--Police have sent papers to prosecutors over a suspected fraud totaling 180 million yen ($1.6 million) by an 89-year-old former top-selling saleswoman who worked for a leading life insurance company for more than half a century.

Police did not say whether the suspect has admitted to or denied the allegations when they announced the case on May 19.

The 180 million yen is part of a total of 2.2 billion yen in damages the woman had caused to at least 25 of her clients while she worked for Dai-Ichi Life Insurance Co., police sources said.

The woman, who had worked for the insurer’s office in Shunan in the prefecture, is a well-known figure with strong connections to many local political and business leaders.

“She was a big celebrity and everybody knew her,” a Shunan city assembly member said. “She looked pretty sharp and tough.”

In the case sent to prosecutors, the woman is suspected of having swindled 180 million yen from a client in her 70s between early March and early April 2019.

The suspect approached the client in February 2019, saying she would be able to receive a 30 percent return after just six months because she could give her preferential treatment due to the saleswoman’s special status within her company.

In fact, the woman, who racked up top sales records over the years, held a special title that was awarded to only less than 20 employees of the company's entire sales force of 44,000 as of April 2020.

The insurance company launched an investigation into the employee’s dealings in June 2020, after one of her clients sent them a tip about the suspected fraudulent activities.

The company fired her in July last year and filed a criminal complaint with police.

Two of her alleged victims who live in Shunan filed damages suits last year. One said she was defrauded of 10 million yen in a fictitious deal.

The other entrusted the woman with 50 million yen, but the money was never returned to her.

The former saleswoman was diagnosed with dementia and a lawyer was selected as her guardian to handle the lawsuits, as she does not have the capacity to argue in court.

Dai-Ichi Insurance announced a new policy in November that it would cover 30 percent of the damages of all the victims. But in March, it shifted to an intent to compensate the full amount when their losses were certified.