Kumamoto OKs local officials to get vaccine shots if canceled 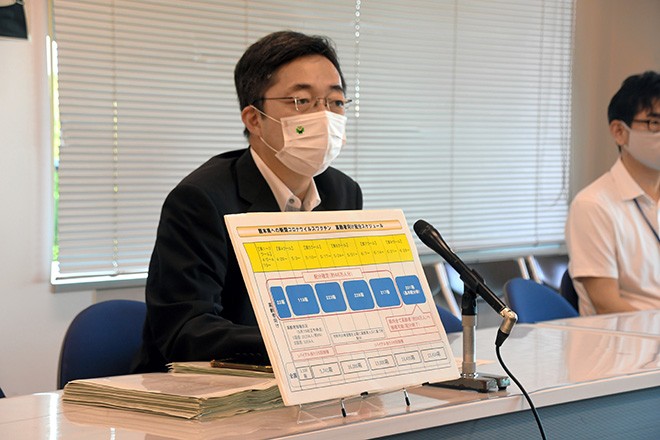 Takashi Kimura, vice governor of Kumamoto Prefecture, explains the guidelines for dealing with canceled vaccine appointments at the prefectural government office in Kumamoto on May 19. (Shomei Nagatsuma)

KUMAMOTO--To justify getting COVID-19 shots ahead of the elderly or medical personnel, Kumamoto officials here have made the practice permissible for local government heads and others if there are cancellations of appointments.

The Kumamoto prefectural government, its mayors’ association and other groups made the guidelines on May 19 to allow municipal heads and others to receive vaccine shots in the event of cancellations.

It marks the first time in Japan that such a guideline on vaccinations has been created, according to a prefectural official.

Recently, municipal government leaders in Ibaraki and Hyogo prefectures and others evoked controversy when it was found they had received jabs ahead of the elderly and medical personnel. They justified the shots by saying that there were cancellations of vaccinations or they were in charge of their town's vaccination program.

When Kumamoto Governor Ikuo Kabashima exchanged ideas with the head of its mayors’ association and head of the town and village association on May 14, he disclosed his plan for the prefecture to make its own rules to avoid similar criticism.

“If rules are set and people get canceled vaccine shots based on the rules, there will be no problems,” Kabashima said.

Takashi Kimura, vice governor of the prefecture, said at a May 19 news conference that there is a certain "mood" among the public that local officials should not get preferential treatment, but there may be some necessity for doing so.

“But they should not receive shots behind people’s backs," Kimura said. "I want them to get vaccinated after their policies are made public in advance.

The guidelines for Kumamoto designate who will be eligible for vaccinations when inoculation centers receive unexpected cancellations. Those eligible include workers at inoculation centers, heads of municipal governments, local officials who are in charge of anti-COVID-19 measures and day care personnel who work with the elderly or disabled people.

The municipal governments are asked to make their own policies based on the guidelines and post them on their websites.